Taqueria Playa Tropical has been on my list of places to try for ages but we don’t make it out to New West often. They’re well known for their monster burrito offering. 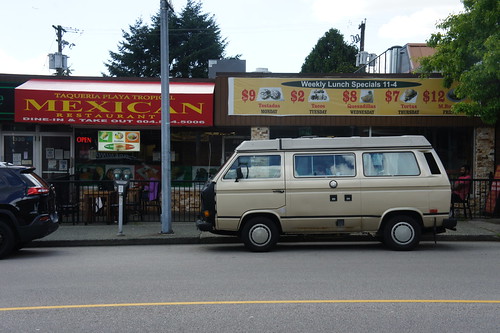 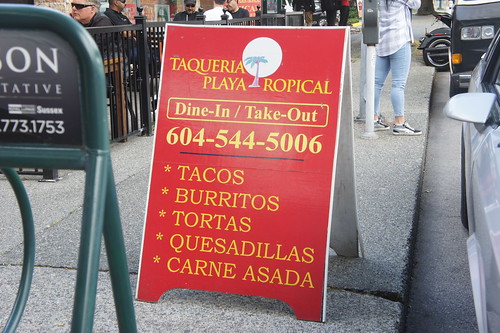 We dropped in on a Tuesday afternoon (around 1:00pm) for a late lunch and had to wait 30 minutes for a table to open up. There’s five tables outside on their patio. Service is a bit slow and lacklustre but nothing we weren’t expecting. 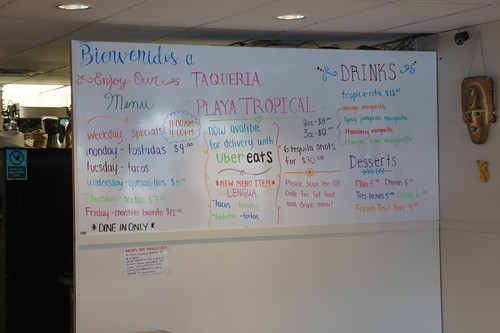 The menu consists of soups, appetizers, tostadas, tacos, burritos, quesadillas, special house platters, tortas and desserts. They have weekday specials (from 11:00am to 4:00pm). $2.00 Tuesday tacos is easily the cheapest we’ve seen in town. They also have lengua up on their board but didn’t have any available when we inquired. 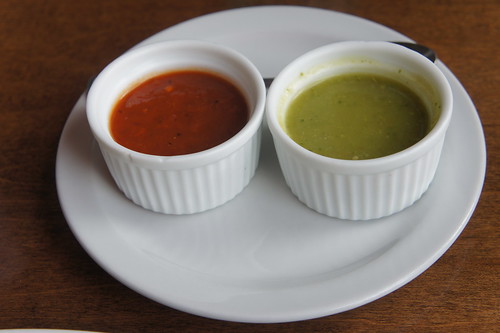 They brought out a red and green sauce for our tacos but oddly we had to ask for it. Red sauce was spicier with a tiny kick (you’ll see a few seeds mixed in). Green sauce was much more subdued but still tasty. 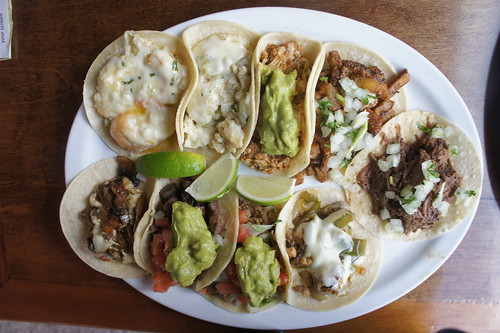 We decided to try almost all of their taco options (everything except for the vegetariano). They’re generous with the meat portions but it’s a mixed bag; some/several were overcooked and salty. 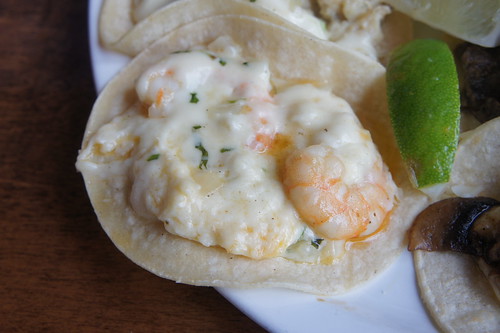 Camaron (shrimp) was overwhelmed with a huge slab of melted cheese. 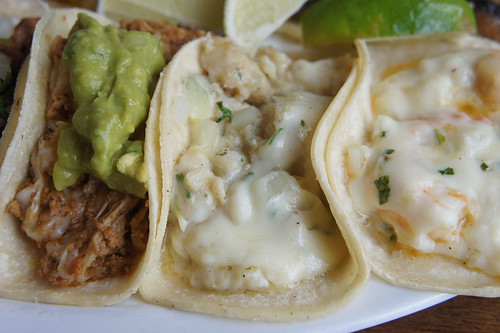 Same with the pescado (fish) although it was excellent and could have held it’s own without the cheese. 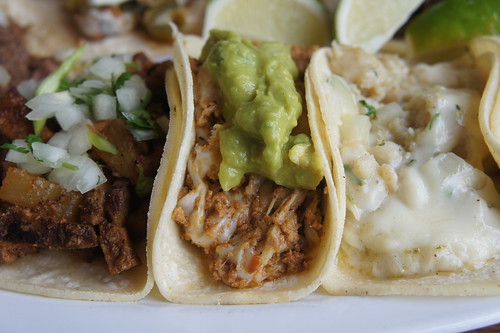 Choriqueso (chorizo) had a soft texture but the meat was over salted. 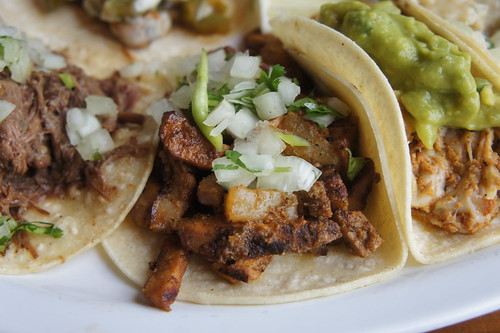 Pastor (marinated pork) had a generous portion of guacamole on it but the pork itself was dry. 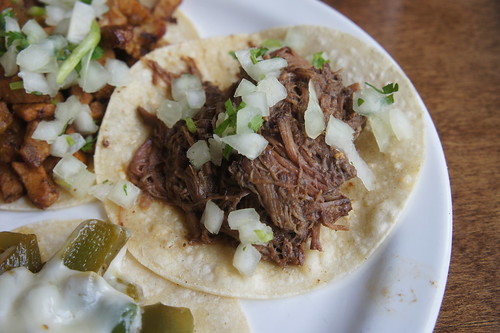 Barbacoa (slow cooked beef) had a heaping of meat but again it was dry. 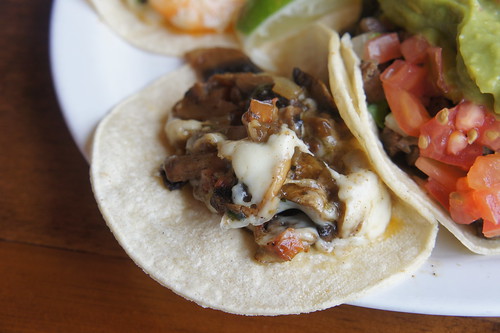 Champinones (mushroom) reminded me of a fajita offering. 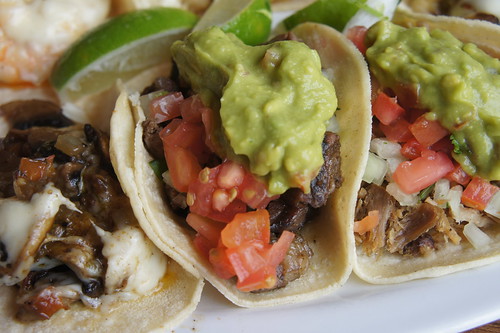 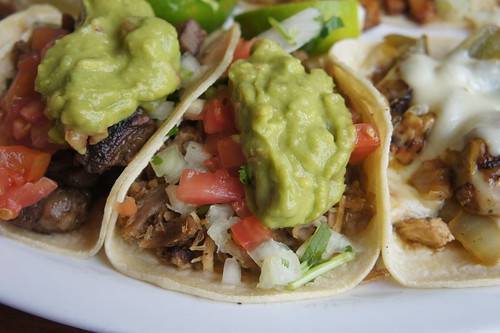 Carnitas (slow cooked pork) was shredded but a touch dry on it’s own. 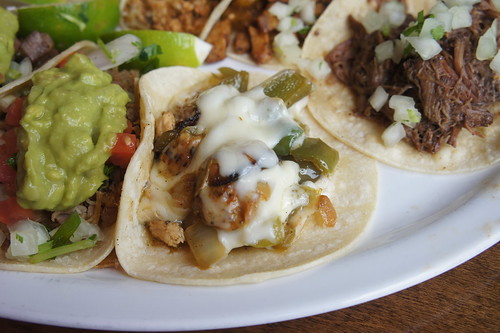 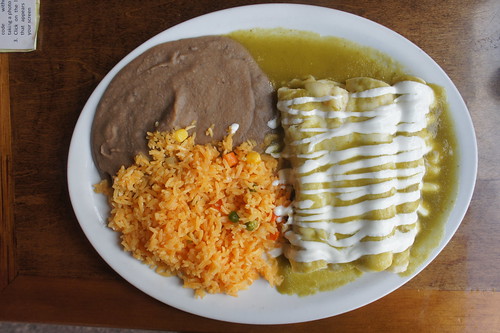 Four corn tortillas with shredded beef, melted cheese and sour cream with rice and beans. We opted for the salsa verde, which had good flavour but wish they had gave more. The shredded beef was slightly dry (seems to be a running theme with their meats). 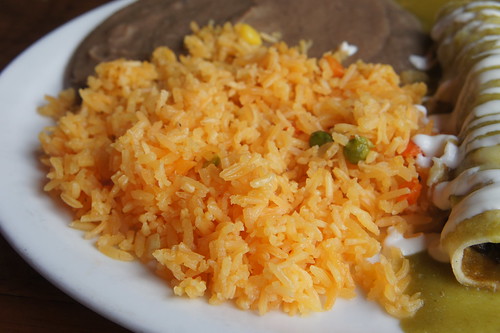 Rice was standard fare but the beans were better than most. 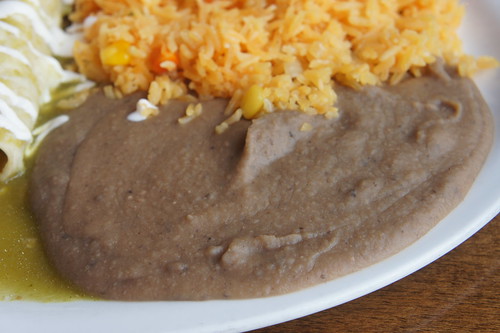