The whole month of February is dedicated to Calgary’s Hot Chocolate Festival! How fun. I can’t believe Edmonton doesn’t have one, especially when this was Calgary’s 6th time!

Over 89 drinks to choose from which are broken into traditional, artigiano and spirited! I was able to hit a few up while I was in town for the long weekend. Let’s just say I recommend you share one drink, that way you can try more places AND keep the sugar high in check. We shared between three people and that was more than enough for me.

First stop was Seasons of Bowness after a bumpy outdoor skate session. Seriously, that was some shitty ice. 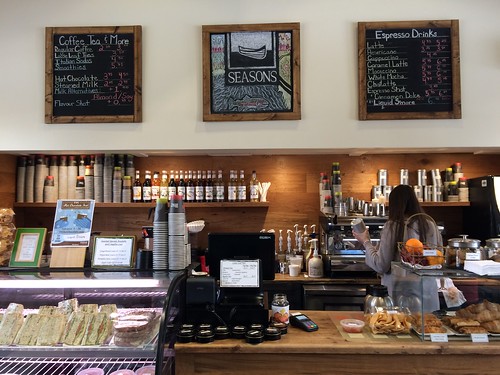 The inside is cozy but there was only one table to sit at. 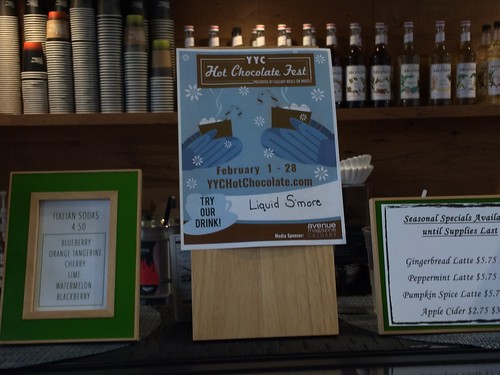 They have some cold sandwiches and pastries if you want a snack. 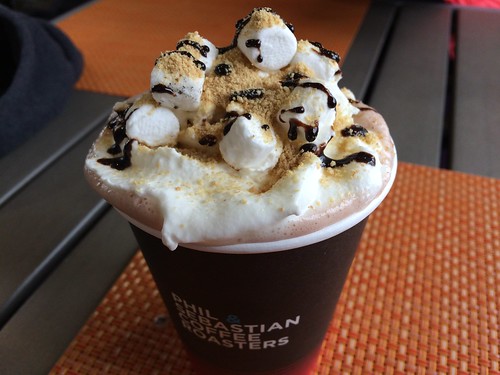 Chocolaty, marshmallowy with hints of graham crackers. This baby was sweeeeeeeeeeet. Nothing too distinguishing to differentiate itself from a regular hot chocolate. I’d give it a 3/5.

Never been to the Beltliner for food but from what I’ve read, it seems like a decent breakfast/brunch place. Then again, maybe not giving it’s attached to a hotel… 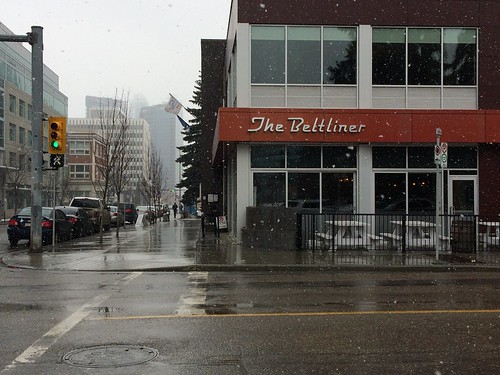 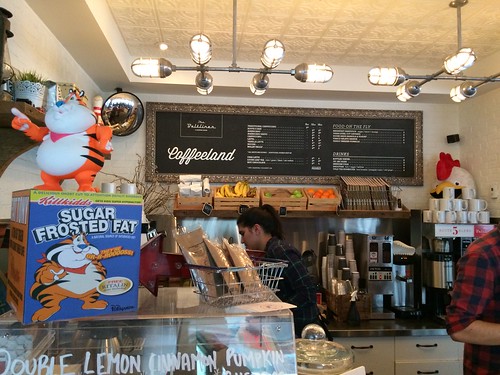 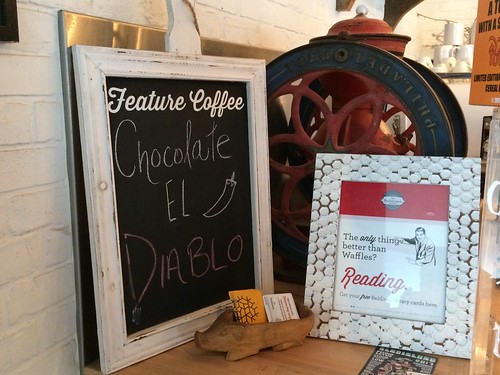 Cool poster hanging on one of the walls. 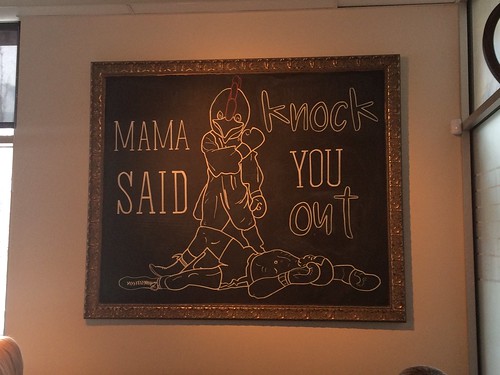 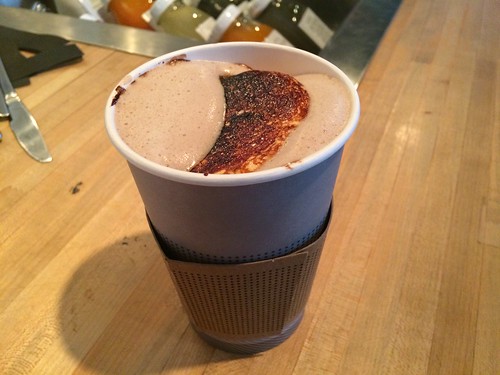 Spiced hot chocolate topped with chillies, cinnamon, nutmeg and brûléed marshmallow. The marshmallow had a nice caramelization to it but that was about the only good with this drink. The rest was very, very meh. 2/5.

Right across from Eau Claire Market, we finally hit up a legit coffee place. 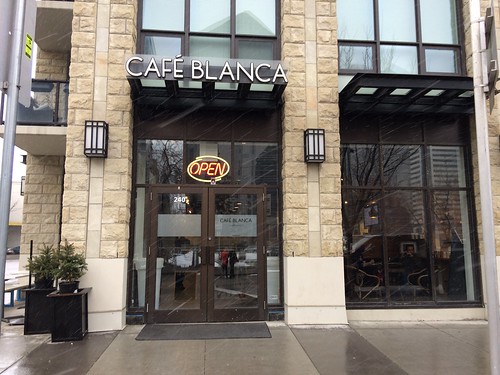 Yes, we did try out Cafe Blanca’s hazelnut heaven. They even colour co-ordinated the sign to match their drink. 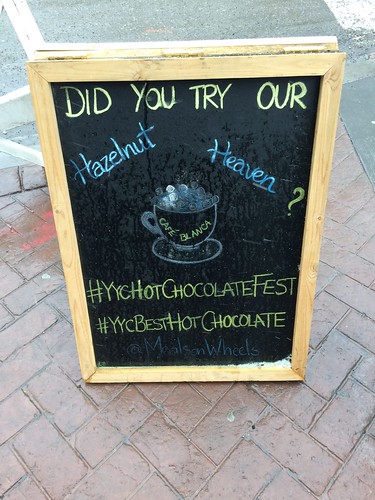 The menu of drinks. Waittttttttt, they have PHO!?!? 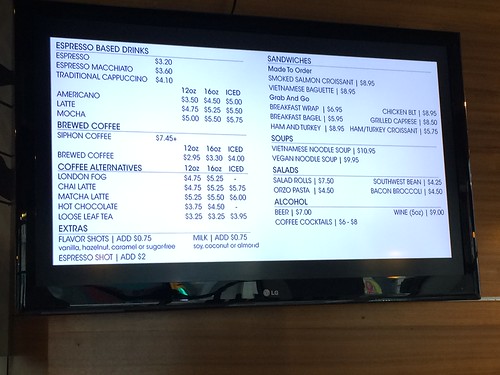 The inside is chic, relaxed, hip. Spotted some board games in the back and they have comedy/music nights, which is tres cool. 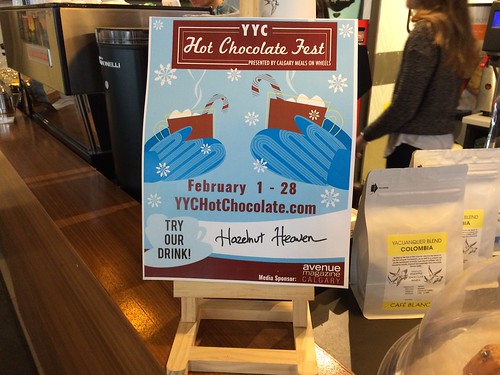 The decor is awesome. Take a look at the ceiling when you sit down. 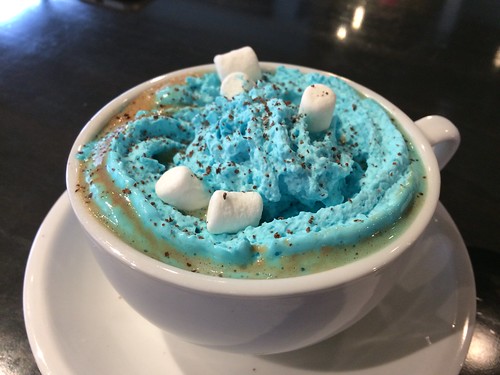 Creamy, thick hazelnut with marshmallows and vanilla whipped cream. The only drink that we tried that I would have been able to drink to myself. The hazelnut was prominent and everyone agreed this was the best hot chocolate. 4.5/5.

We didn’t get anything at Philosafy Coffee but it caught my eye from the outside, so we stepped inside and took a quick look. 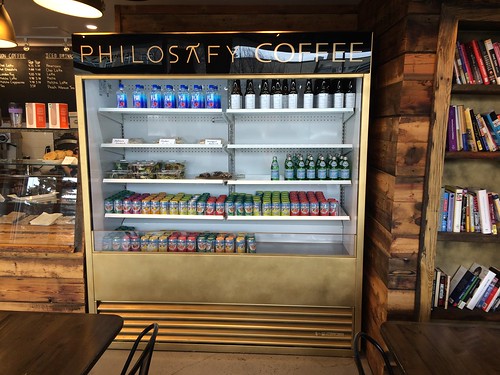 This place just oozes hipster – lots of young people studying and hanging out. The aesthetics, as the kids say these days, was on point. 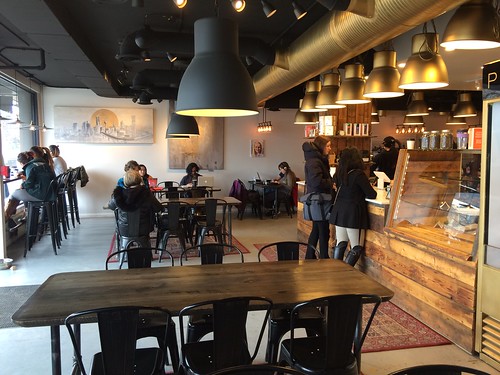 They even had a whole wall dedicated to these moss balls called Kokedama. 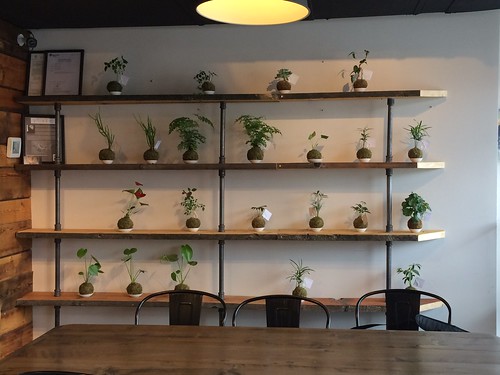 Will have to come back to actually try some of their drinks. They weren’t participating in YYC Hot Chocolate Fest but did recommend their neighbours (see below).

5S17 popped up a few months ago and I remember that they’re an Asian fusion place that does ramen and poke. 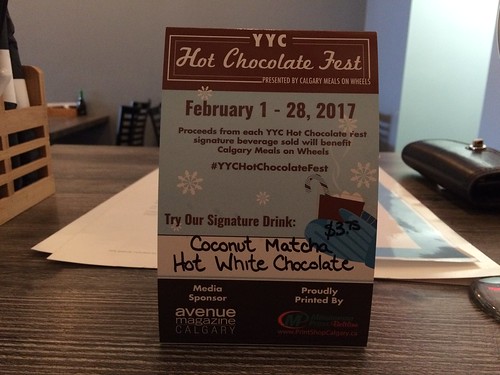 The menus are massive here but we had just finished eating brunch, so no food, just a drink to share. Their special was the first drink that was reasonably priced. 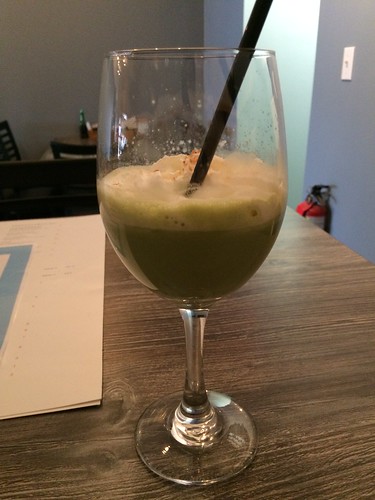 Japanese inspired hot white chocolate. Matcha tea, coconut milk and Lindt white chocolate topped with whip cream and toasted coconut.Served in an alchoholic glass (fancy), it came out hooooot. It was an interesting combo but too rich for my blood. 3/5.

That’s all folks. Trying out four drinks was enough to last me till next year.