$28.00 Monday night three course dinner? Who can say no to that? What a good deal. Even better when it’s for your bday cele. 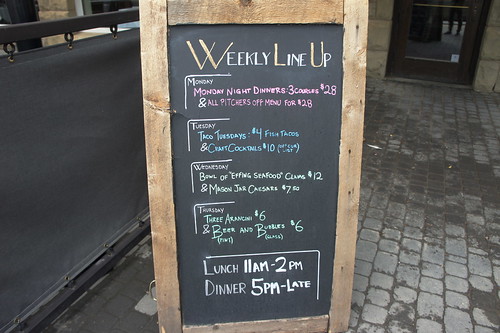 Look, they even have weekday specials! I haven’t been to Alberta Hotel Bar & Kitchen since EDDW but M mentioned to me that they have a killer Monday deal so I figured it was the perfect spot to celebrate me getting old. The place was empty, with AHBK closing off the dining (left) side and only using the bar area to sit people. Seriously, hope they’re busier other times of the week. Would be sad to see them go the way of their predecessors (*cough cough Tavern 1903 cough cough*). 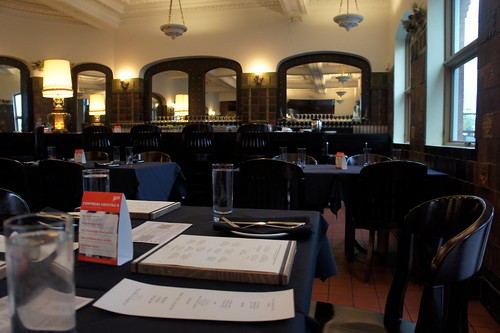 What’s with all the places doing fish taco specials? Keep on seeing Effing Seafood all over the place. He’s just killin’ it these days.

Pitchers are on sale Monday’s for $28.00, which include beer and red or white sangria. We got a pitcher of Red Racer to share but I forgot to take a picture. 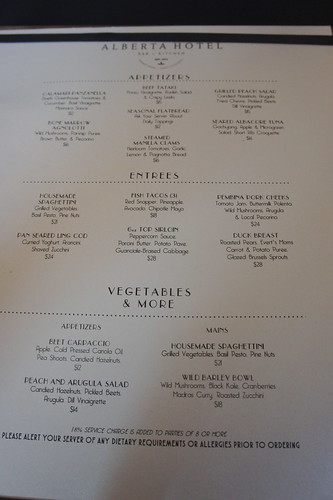 Regular menu. Menu is concise but I didn’t understand why they had a couple duplicate dishes under two categories? 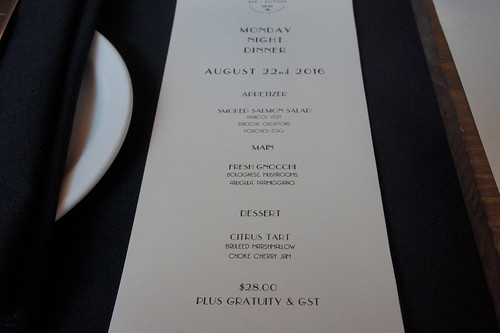 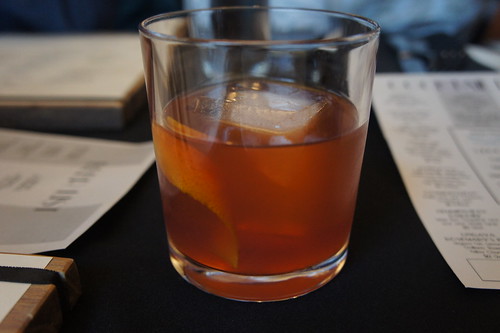 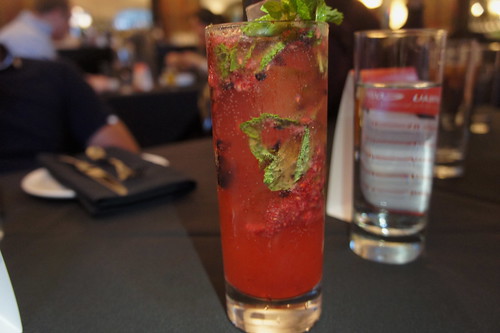 Had a taste of L’s drink. Pretty light, refreshing, almost like a mojito. Berry flavour was there without being overly sweet. 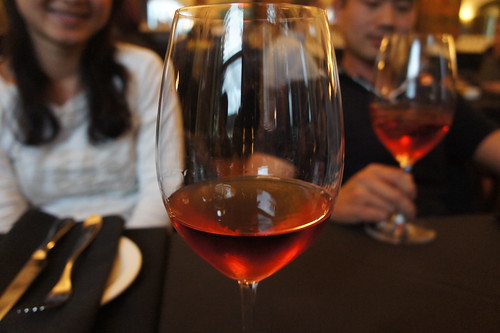 M and T got a couple wine pours to sample. Odd thing was that our waitress never came back to check on them and see if they had decided on a glass that they liked. So instead of buying a bottle, which they originally planned on doing, they settled on a glass. Not sure if this happened because the waitress knew she was already guaranteed a 18.00% gratuity but you’d expect her to at least be on top of the drinks. 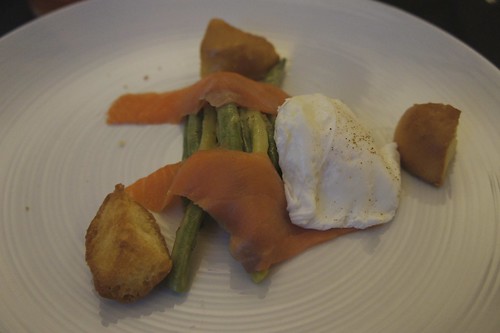 Haricot vert, brioche croutons and poached egg. The poached egg was perfect and the yolk awesomely oozy. The brioche croutons were tiny pillows of heaven and the green beans added a nice element to the dish. No complaints from anyone on the starter. 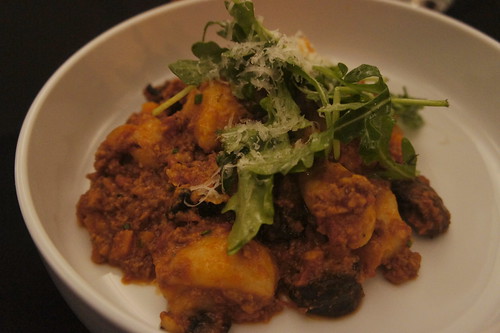 Bolognese, mushrooms, arugula and parmiggiano. It was interesting to see how each bowl was slight different. Some people had a bit more arugula, while others had far more bolognese sauce. Speaking of the bolognese sauce, the combination with gnocchi was unique, if not an odd choice. As M and T had just come back from a trip to Italy, they thought a tagliatelle or farfalle pasta would have complimented the sauce better. Thicker sauce usually goes better with a larger surface area of pasta right? Whatever, it still worked.

The gnocchi’s had a nice bite to them and the sauce was flavourful. The arugula as a garnish was a nice touch as it added a bit of pepperiness to the dish. 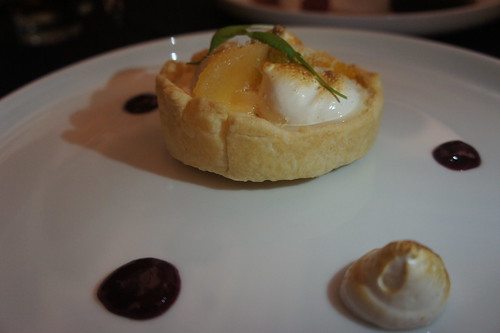 Bruleed marshmallow and choke cherry jam. There was mixed feelings with this one. Some absolutely loved it but a few found the dessert way too sweet. Presentation was excellent and had me ready to dig in. The custard inside the tart was great. I think more of the cherry jam, as a sauce, on the tart rather than as dollops would have helped cut the sweetness. 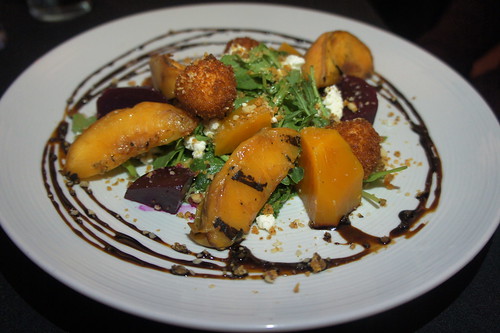 Candied hazelnuts, arugula, fried chevre, pickled beets and dill vinaigrette. Litaly was the only one out of 11 people to not order the Monday special. He said this was one of his favourite salads. Ever. Here’s his take on it – the salad was bomb. It had everything. Sweet, tangy, peppery and salty. All the textures. Donna thought there was cracked pepper in the salad too but we both think she’s bonkers. 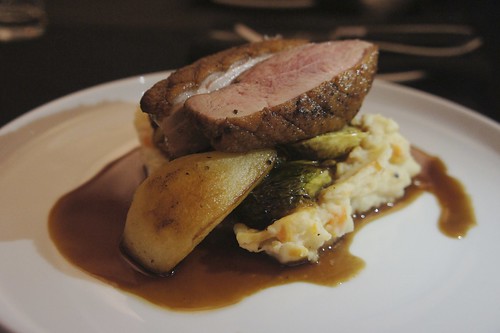 Roasted pears, Evert’s moms carrots, potato puree and glazed brussel sprouts. More from Litaly: the duck dish was also really good. Only bad thing was the meat was a bit tough but the flavour was amazing so I’m willing to let that go. He gave me a taste and I agree; flavours were all there. 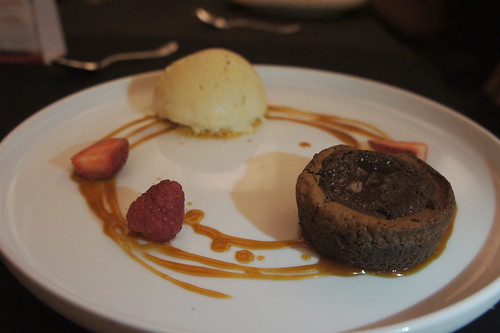 Caramel sauce was on point. Very balanced flavours. The cake was very good, light and moist. The ice cream was sweet enough to balance things out.

Overall, we had a great dinner. The meal was well worth the $28.00 price tag and I thought they timed it out nicely between the dishes. I’ll be back to try another of their weekday specials!