Helloooooooooo Noodle Feast, it’s been too long. Okay, that might be stretching the truth. I’ve been here easily over half a dozen times since my first time writing about them (see here). Not much has changed other than some new flooring. Everything else is same same and that’s a good thing. 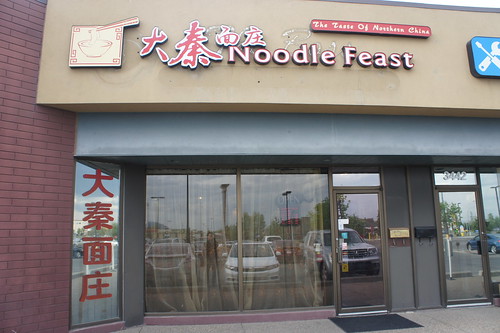 We came on a Wednesday evening and it was busy. Full of Asians getting their slurp on. Luckily, we only had to wait a couple minutes to snag a table for 4. 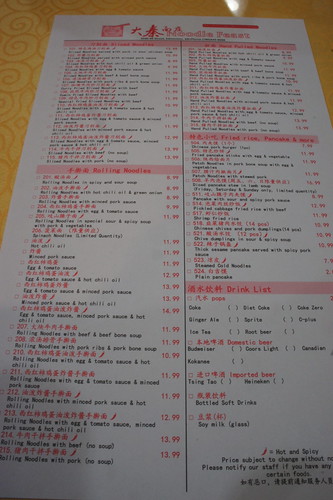 Menu is essentially the same but with a few dishes that have gone up in prices. Still nothing higher than $15.00 so you can’t really complain. If you’ve never been, it’s broken into three noodle groups: sliced noodles, rolling noodles and hand pulled noodles. Okay, there’s also a fourth group: fried, rice, pancake and more. Don’t actually forget about this section because there’s a couple gems. 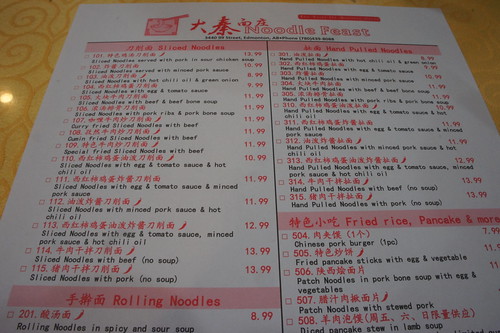 Hand pulled is a MUST but they tend to sell out. Hand pulled noodles were crossed out this time. Nooooooooooo. 😦 Get here early to avoid disappointment. Oh well, this meant we were forced to try some new dishes! 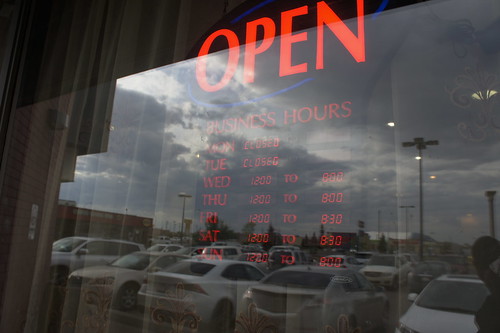 Hours still blow my mind: closed Monday and Tuesday and only open till 8:30pm! WTF. 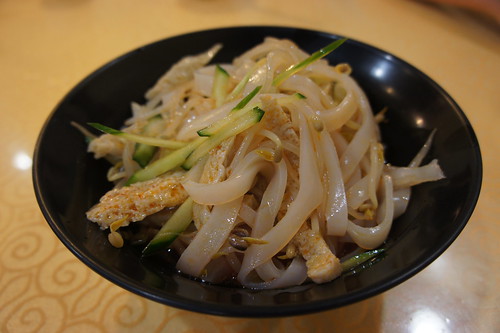 Their cold noodles are bomb. Refreshingly light, slightly spicy, it’s the perfect way to start your meal and tantalize your taste buds for more. 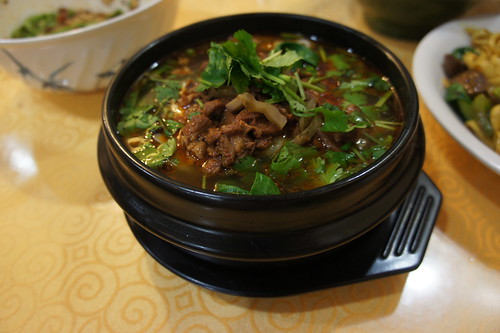 Finally got to try the elusive sour chicken soup. I’ve always seen other tables ordering this dish but couldn’t figure out which one it was till I did some sleuthing. Broth is quite good – reminds me of bak kut teh as it is more herbal tasting and medicinal. 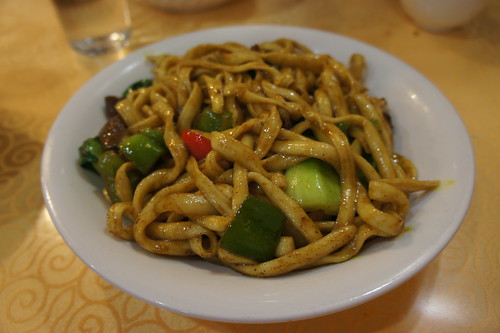 Another new dish that everyone enjoyed. Really liked the chewy texture of the noodles – nice and springy. The curry is mild so don’t let that deter you from ordering it if you can’t handle heat. The beef was nicely seasoned and you get more meat here than in any of the other bowls. 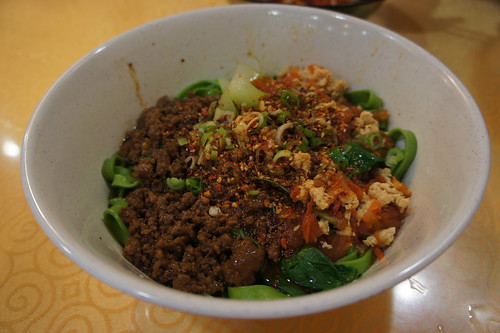 The spinach noodles is a must. We always order it. So delicious! This is the one with green noodles in case you couldn’t picture spinach and noodles together. 😉 You can customize this but we generally just go big and get everything. The combination is perfect. Seriously, this bowl was eaten fast and furious. 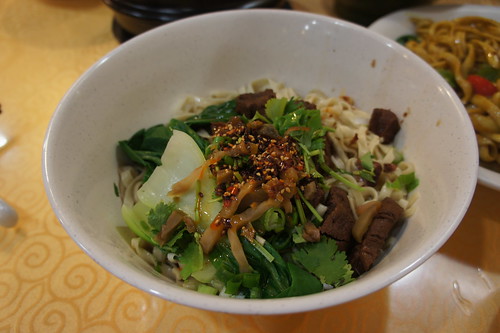 This rolling noodle dish was probably the most simplistic out of everything we ordered but sometimes simple is a good thing. 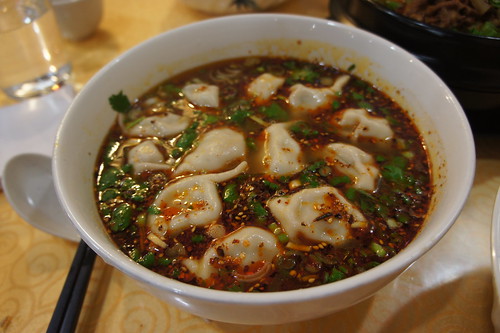 You get 12 pieces in the sour and spicy soup (same broth as #205) with sour, almost tanginess coming through the most. I personally prefer this over just the Chinese and chive pork dumpling (#518) on their own. The dumplings soak up the broth nicely and give it a nice one-two punch. 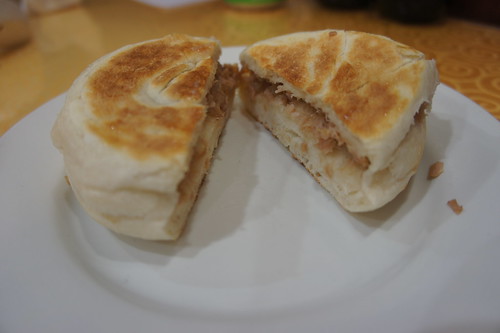 A Chinese street snack. Personally, I think it’s overpriced but it’s worth trying if you’re with a bigger group. Pork is tender and juicy while the bun is nicely crisped. 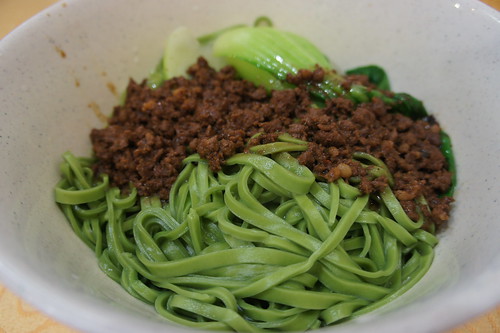 Like I said above, a must! This one we ordered with just the minced pork sauce. So gorgeous, just look at that photo. 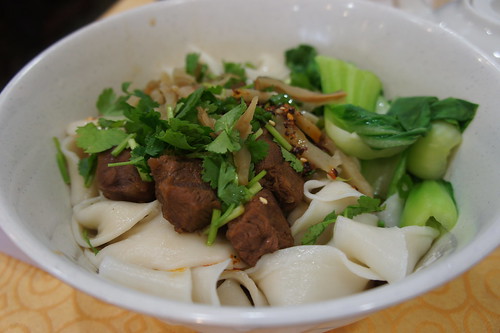 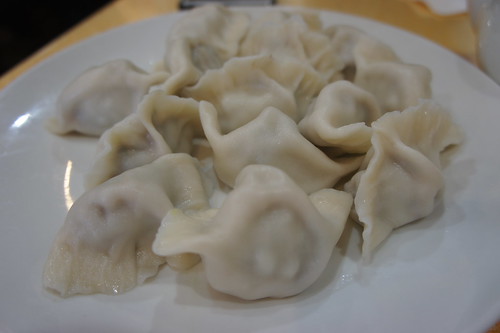 You get 14 pieces so two extra dumplings over the soup option. These come plain but you can add some of their table side chili hot oil to give it some zip. 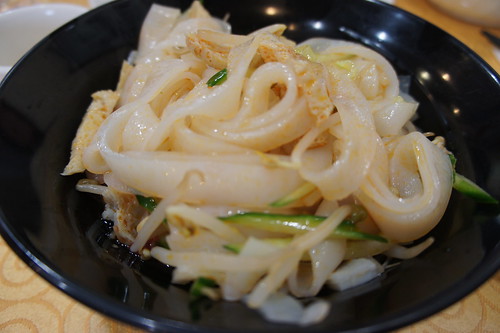 Always get an order of the cold noodles, that’s an order. It’s almost like a palate cleanser before your main entrees? 😉

This is one of the few spots in town where I want to work my way through the entire menu. Slowly getting there. Noodle Feast is king when it comes to noodles and Northern Chinese food! This area is slowly becoming my go to place for eats. Now if only I lived closer.