So hands up if you’ve heard of Los Andes before? No? Good because then that makes two of us. Bbops tipped me off as he’s been years ago so when he told me about the existence of a Chilean restaurant in town, I was like I need to try this place immediately. Barely any info online so that left us going to the restaurant hoping for the best. 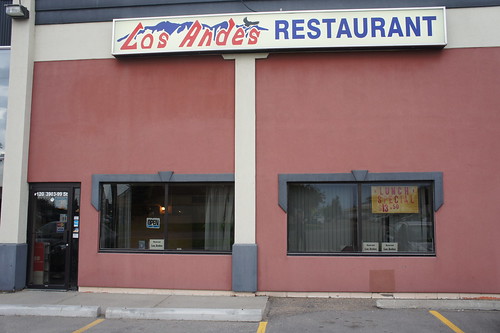 We came for an early Wednesday dinner and the place was completely empty (which stayed that way for our whole meal). 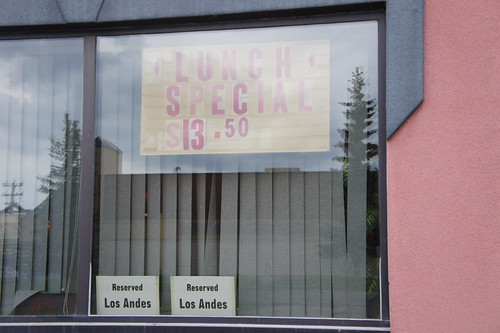 Their hours make no sense. I’d call them to make sure they’re open. 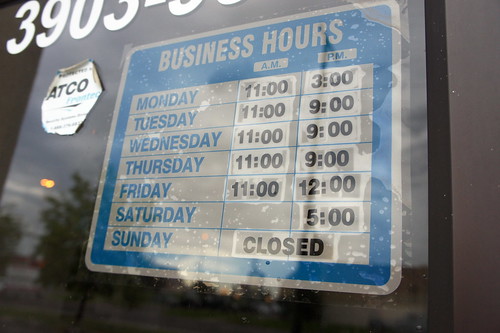 The inside is pretty spacious and has an interesting mix of decor. A large mural of the Andes mountains (that’s my guess) is front and central. There’s no music or ambiance here but a TV was turned on halfway through our meal blasting the Spanish news. 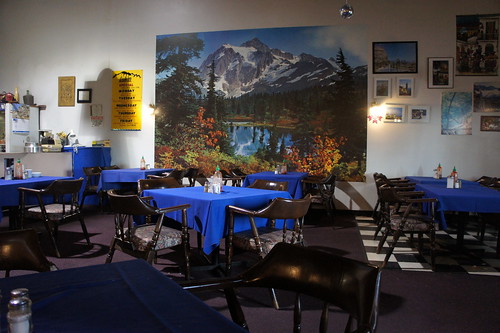 They have lunch specials from Monday to Friday. $13.50 is a pretty good deal! Too bad there’s no way I’ll ever be in this neck of the woods to try them. 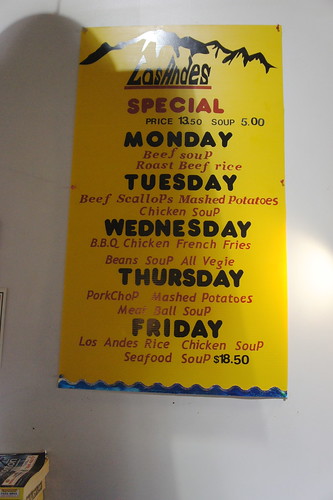 The menu is split into four sections: appetizers, chicken/pork, beef/fish and sandwiches. 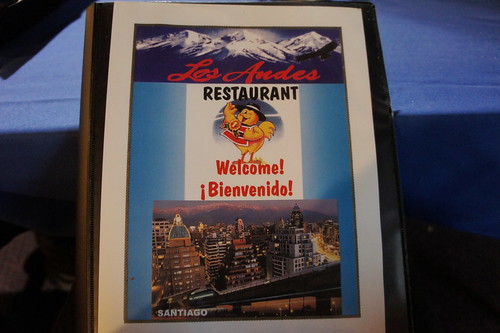 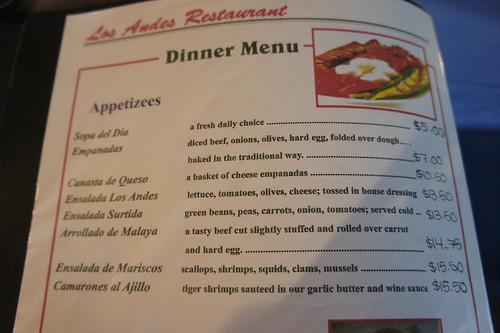 Entrees are a nice mix of chicken, pork and spanish sausage. 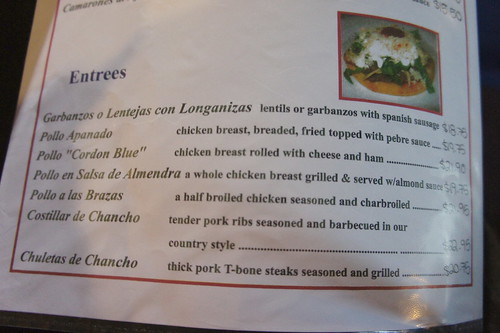 More entrees. Not sure about the NY steaks here but next time, the pescado frito. 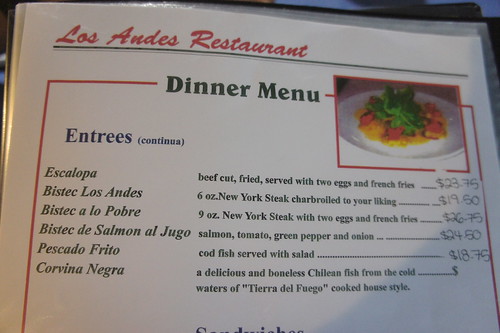 Sandwiches to round things off. One will do this time ’round. 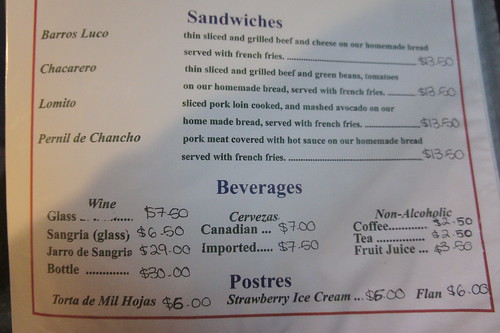 The owner/chef/waiter was the only one working the restaurant that night. While he seemed like a relatively nice guy, the way he asked us things was slightly patronizing. For example, he asked us if we needed help with the menu but didn’t offer any suggestions on what dishes to get. Another weird action was when we wanted to order one appetizer, he straight up said don’t get it or that we wouldn’t like it. Not sure why that’s on the menu then. His demeanor also seemed to change once he realized Jboy spoke Spanish… 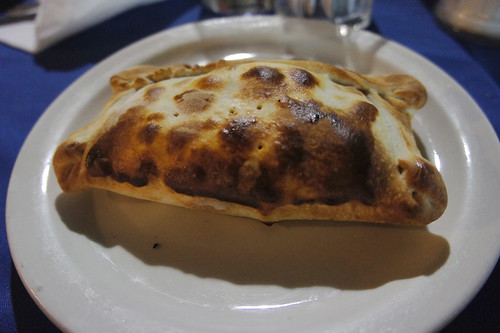 Your eyes read that right – it’s $7.00 each! We were told by the chef that these meat empanadas are bigger than normal and made fresh. He wasn’t lying but I still think these are totally overpriced. The inside was made up of diced beef, onions and olives. Everything about this empanada was delicious. I’d say try at least one and share. 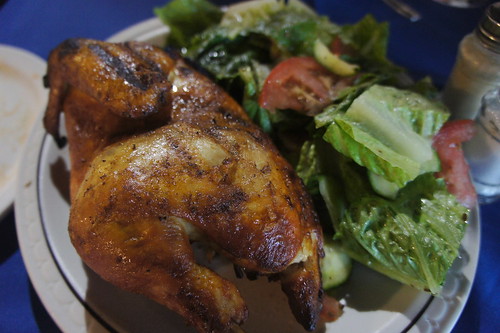 You get a whole barbequed chicken with a side of salad. The BBQ chicken was probably one of the best I’ve had in Edmonton! Totally worth it. This was Jboy and my favourite entree of the night. Super tender, juicy and flavourful, this reminded me of Portugese rotissierie chickens but without any fire/heat to it. The salad was also great with a mix of tomatoes and cucumbers tossed over a zesty, citrusy dressing. 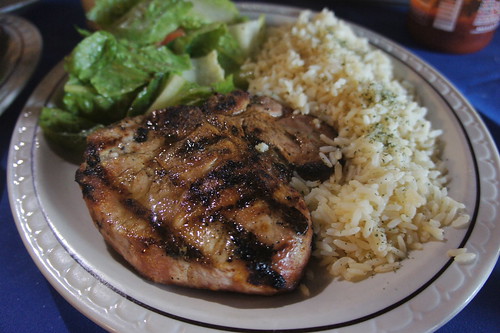 The pork comes with a small salad and rice. The rice was pretty meh for me – I found it pretty bland and more of an after thought. The pork was a nice size and cooked just right. No special sauces or anything like that on top. Kept simple and tasty. 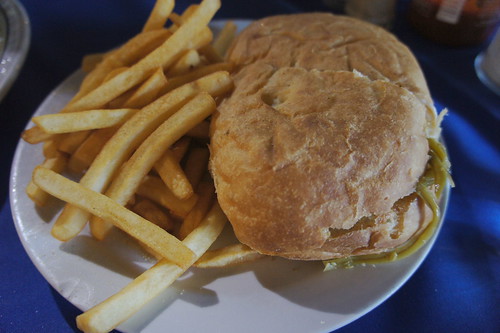 We had to try one of their sandwiches and seeing as we already had picked a chicken and pork dish, we went with beef for our third entree. Thinly sliced grilled beef, tomatoes, green beans and mayo on a homemade bun with a side of fries. Delicious! The grilled beef was seasoned well and the slices were the perfect thickness. The bun is homemade and that made all the difference. It elevated this sandwich from being just okay to pretty damn good. The fries needed to be crispier. Some pieces were lumpy and had no bite to them. It was also odd that there were ketchup packets rather than a bottle. 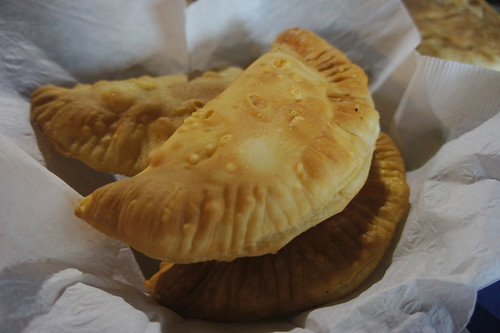 These come as a basket of three. I’m not sure why you can’t order individual amounts but we were a party of three so it worked out. I couldn’t figure out Los Andes deal with having Sriracha sauce on the table instead of say their own homemade hot sauce? Kind of bizarre given everything else is made fresh in house. The cheese empanadas came out hot and fresh but I have to give the edge to Mamenche’s.

I want to try their torts de mil hojas (1000 layer cake) which they were sadly out of along with their specialty fish dish next time. We were pleasantly surprised by the food here and I’m happy to say I’ve actually discovered a new place!