Geez, where does time fly? It’s been a year and a half since my first visit to Mamenche’s. I’ve been meaning to come back to try more things off their menu. Well, that finally happened when I was able to round up the troops for a Friday lunch. 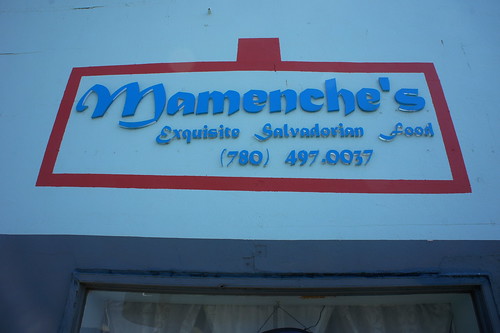 Hours are a bit different than most as Mamenche’s closes Wednesday and Thursday. 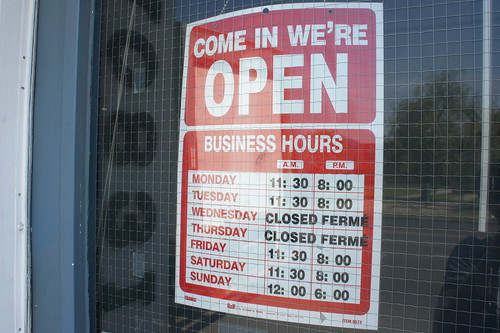 Yahoo, who can ever say no to pupusas? I certainly can’t. 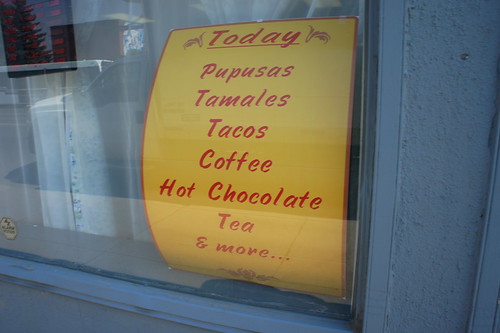 The inside of Mamenche’s reminds me of an old folks home. Decorations are simple and bare. But who cares as long as the food is legit? I certainly don’t. 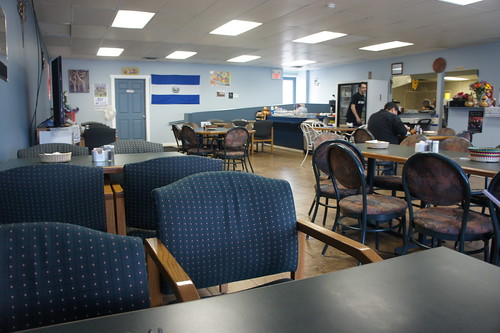 While we were perusing the menu, we found out that sadly their specials of the day weren’t available. That seemed odd because it was already around 12:30pm by the time we arrived and were ready to order. I guess that goes with the laid back environment. 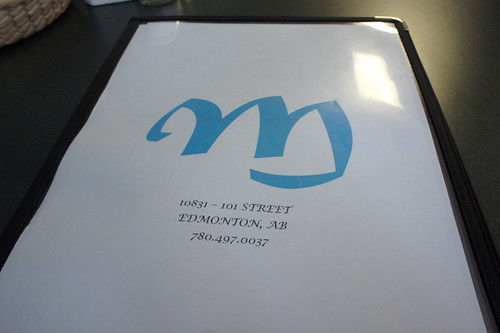 Two pages for their menu. First page is light cuisine and entrees. 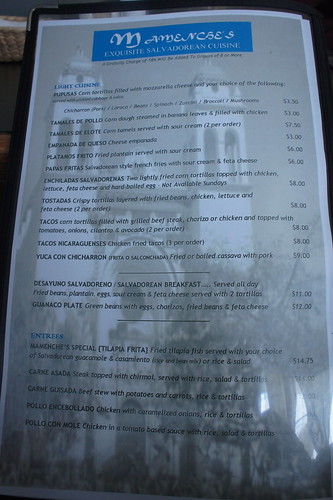 Second page is soup, dessert and beverages. We saw a regular (who was playing some guitar!) getting a soup that looked absolutely delicious. On the list for next time. 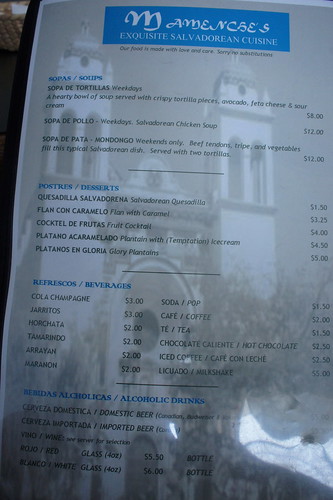 Let’s take a closer look. So many delicious options. Obviously, pupusas were a must along with cheese empanadas that were so good the first time around. 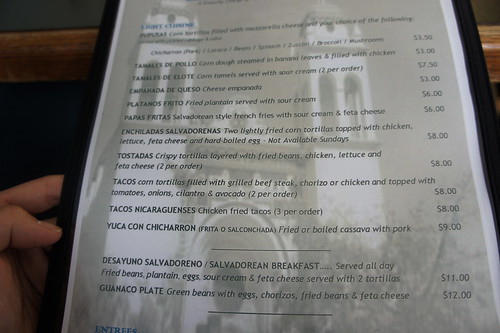 Fried tilapia? Don’t think this exists anywhere else in town. Plus, this is Bbops favourite from when he used to live in South America. Done. 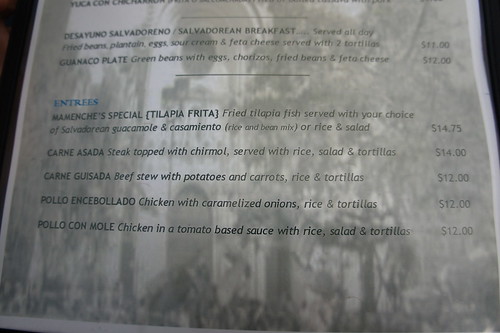 I was surprised to see how empty the place was. Only a few tables were occupied but a couple people strolled in for takeout. But still, this place should be PACKED given how cheap and delicious the food is. And how close it is to downtown. Does no one know about it? Is it because it looks like an attachment to the auto shop next door? The slightly sketchy area? The answer eludes me. 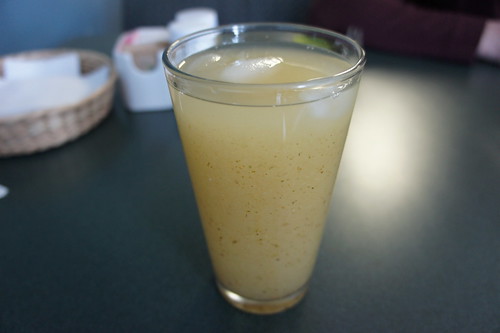 If there’s one thing you need to get, it’s the arrayan. This defines guava heaven. 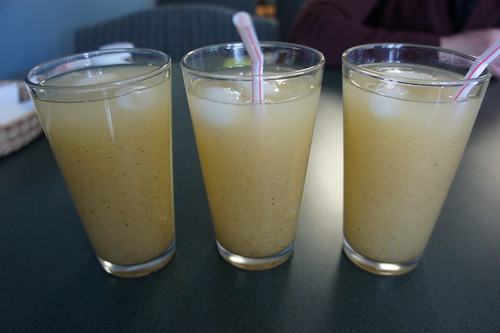 Bbops and Dbone are goons. They ordered the exact same drink as me. Copycats but I guess mimicry is the best form of flattery right? 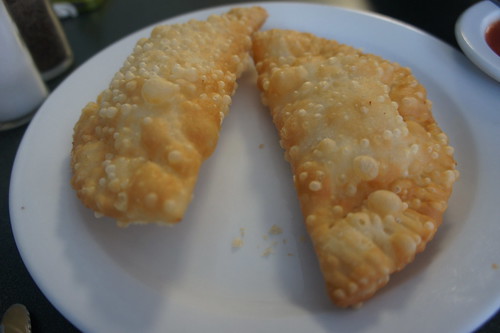 These were table favourites the first time I tried them so had to order them again. We ordered two to share and they came out straight from the deep fryer. Cheesy goodness and perfectly fried. 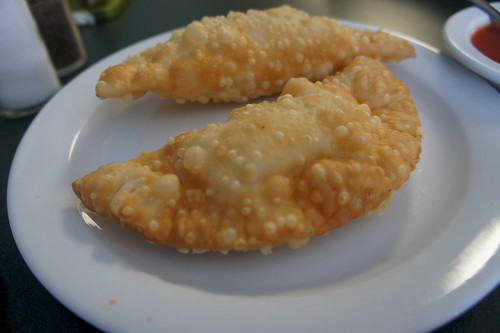 It might be my imagination but I feel like these were a bit smaller than the originals. 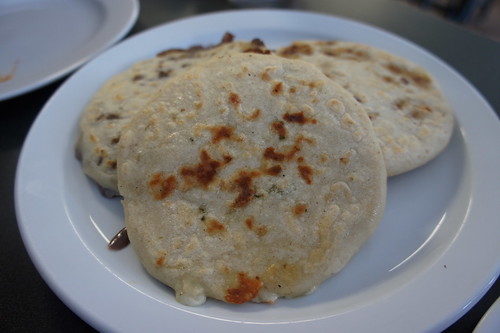 Corn tortillas filled with mozzarella cheese. There’s seven types to choose from. We decided to try two pork, bean and loroco (a type of South American flower bud). Comes with the typical side of pickled cabbage and salsa. We were also given a jar of their homemade hot sauce which was BOMB. They should probably sell this – I’d buy a jar for home. It borders dangerously along that line of being too hot but still tasty and flavourful. Let’s just say the sauce lingers. 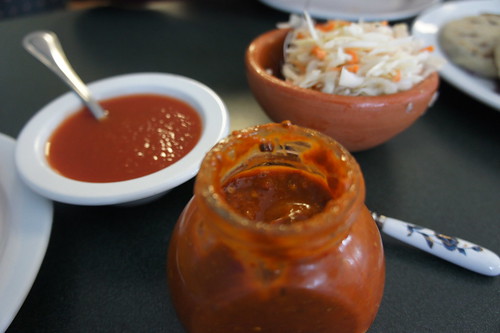 The pupusas here are super tasty. Our favourite of the day? The bean one! Couldn’t believe it myself but it was pleasantly delicious. The lorsoca was just as the waiter described it – flowery but much more subtle in terms of flavour. The pork ones were pretty standard. Too bad they didn’t have any special pupusas like on my first visit but now that I think about it, I believe it’s a weekend thing. 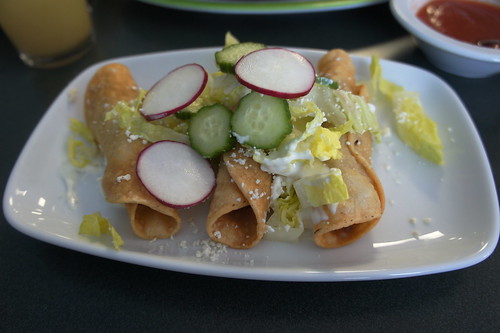 You get three pieces of chicken fried tacos that are served with radish, cucumber, queso and lettuce. Super crunchy but also light and refreshing. 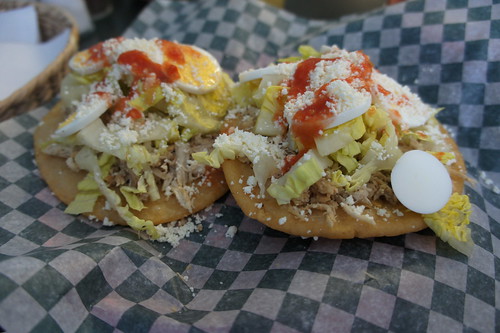 Two lightly fried corn tortillas topped with chicken, lettuce, feta cheese and hard boiled eggs. The enchiladas was probably my least favourite out of everything we ordered. Not that it was bad, the torta it came on had a satisfying bite to it. It was more from the ingredients – the pork was a bit dry and I’m not the biggest fan of sliced hard boiled eggs. You also only get two so keep that in mind if you’re sharing. 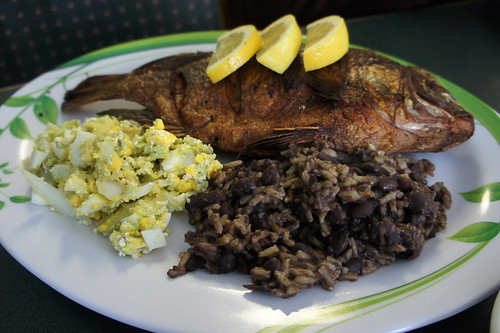 Fried tilapia fish served with Salvadorean guacamole and casamiento (rice and beans). What’s Salvadorean style guacamole? I’m glad you asked. Guacamole with hard boiled egg and onion mixed in. I would never have thought to mix these two together but it’s surprisingly delicious. First time I’ve seen it done this way! 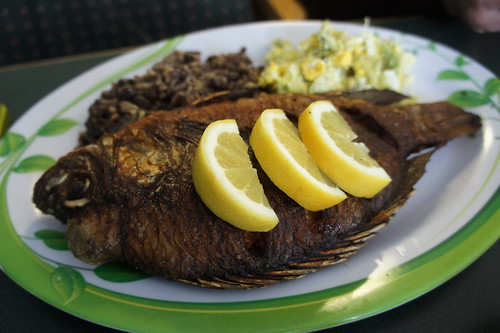 As for the the tilapia, you get the whole fish and it is superb. Perfectly crunchy on the outside, soft and tender on the inside. Just be ready to put in a some work to get every last tidbit. Honestly, I’m not a huge fan of fried fish as it’s pretty difficult to make without over frying it but Mamenche’s kills it. Bbops is in love – he hasn’t had this since his days in South America.

Even the chef came out to say hello and ask how everything was at the end of our meal. Adds to the charm of this place. Everyone’s super friendly and down to earth, the food’s homemade and prices are super reasonable. We ate everything and left with very satisfied bellies. I’ll be back again sooner this time around, I swear!