The Workshop Eatery is the latest restaurant to arrive in the deep south. Blink and you’ll miss it as there’s no signage indicating where you should turn. It had been way too long since I had seen my friend M so we decided to meet up on a Friday night for an early dinner. Like really early. 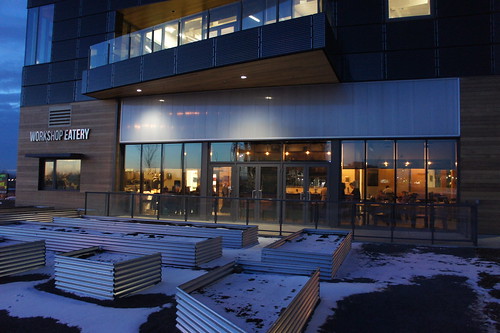 Located inside the Mosaic Centre, the building inside is beautiful with a contemporary, airy, spacious feel to it. The only odd thing about this place is that when you first walk in, you’ll see a bunch of shoes at the entrance. For a second, I was like “do I need to take my shoes off?” even though I knew there was a day care and yoga studio in the building. 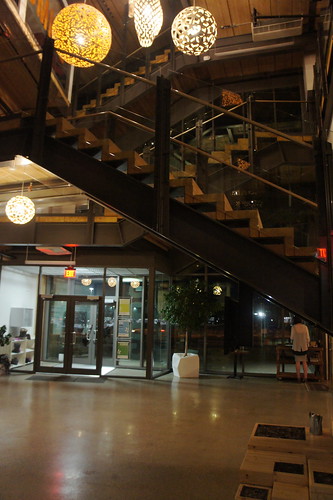 Love one page menus. Things are split into bar snacks, small sharing plates, large plates and desserts. Entrees are on the pricier side ($22.00 to 34.00). We sat at the bar as the place was packed. Don’t think we could have sat a table even if we wanted to.

Honestly, we’ve never seen so many old, white people dining out (seemed to lack a “diverse” clientele according to M). This place is the spot if you want to pick up some grannies. 😉

The barman was nice enough but man, he was a non stop chatter box. I’m sure some of the single ladies we were sitting by would call it charming but it was over the top to me. 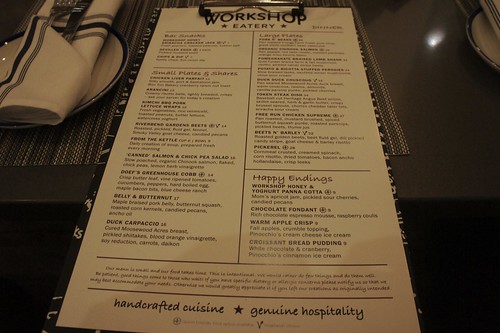 If you read the fine print underneath, pretty jokes that they say “be patient – good things come to those who wait”. Well, that definitely was the case during our meal. The patience part I mean. There was a huge break between our appetizers and entrée.

One more thing – so many people ordered the kimchi BBQ pork lettuce wraps. Asian dishes seem to be all the rage these days and Workshop Eatery is cashing in. I couldn’t stop staring at their take on bo ssam. Where’s that “WTF” emoji when you need it? 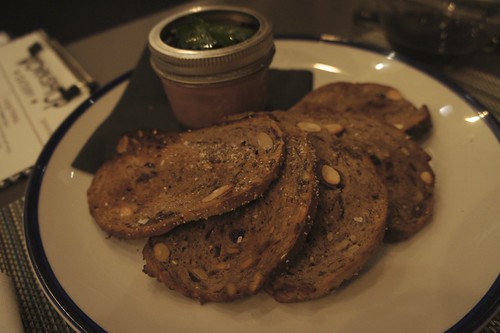 Silky smooth, port & Saskatoon jam on Bon Ton bakery cranberry raisin nut toast. Nice to see that they use local bread from Bon Ton. We used to frequent Bon Ton Bakery all the time back in the good ‘ol days. Bread is still as good as I remember it as these were lightly toasted and complimented the smooth chicken liver. If you like pate, this is right up your alley. Only complaint was that there were only 5 pieces of bread! We asked the bartender for one more piece and he brought us out a couple more. 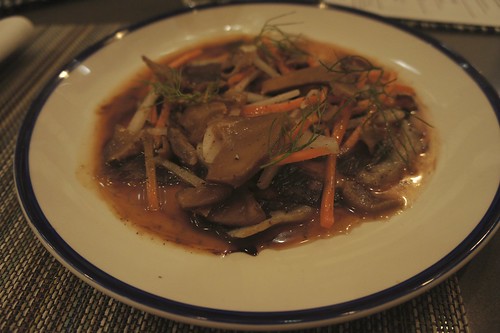 Cured breast, pickled shiitakes, blood orange vinaigrette, soy reduction, carrots and daikon. M originally didn’t like her first few bites but the dish grew on her. Flavours were interesting as it is very Asian-esque, you get bits of sweet and savoury, especially with the pickled shiitakes. We liked it but that may be due to being used to these flavours? 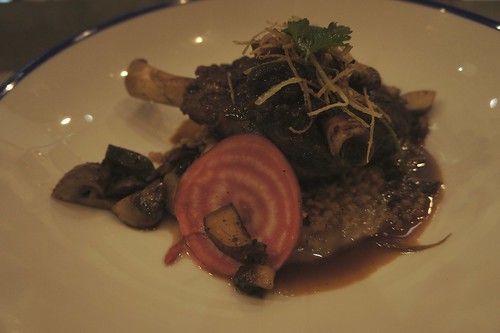 Gold Forest Grains faro, fall mushroom risotto and pickled candy stripe beets. We decided to share an entrée as we decided to hit up Bar Bricco afterwards. The lamb was a bit dry as we had some difficulty cutting the meat off the shank. It was still tasty but don’t expect fall off the bone tenderness. The faro wasn’t as flavourful as Alberta Hotel’s version, which was just divine. The beets were almost inedible as they were rock hard.

Can’t really say too much as we only tried a sampling of the new menu but based on location and price, I can’t see myself coming all the way out here again anytime soon.