I’ve been wanting to try Black Pearl since it opened way back in April 2015. Fast forward a year later, I finally made it out for their Tuesday buck a shuck oysters! That’s right, $1.00 oysters all daaaaaaaaaaaaaaay. Sister restaurant to Café Amore (one of my favourite places in the city), the Crudo brothers second restaurant specializes in seafood, pretty much a rarity in land locked Edmonton. 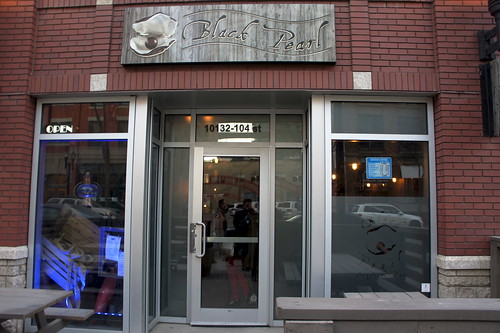 If you’re looking to keep those pennies floating in that sad looking piggy bank of yours, they have specials on Wednesday (1/2 price mussels) and Thursday (1/2 price tacos). 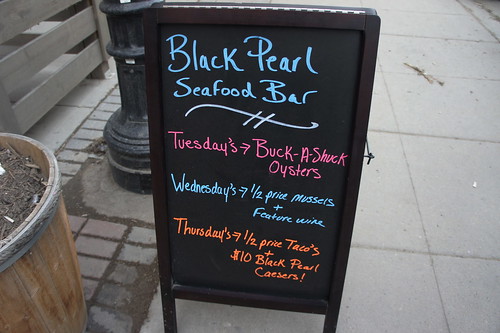 Bbops and I headed over after working out on a Tuesday evening and the place was packed. Only room at the bar where we grabbed seats right smack in the middle of the bartending action. Cool to watch but somewhat intrusive if you were on say a date. 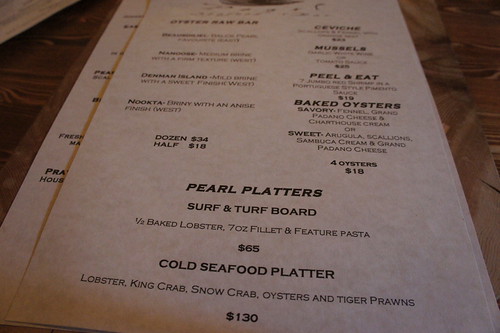 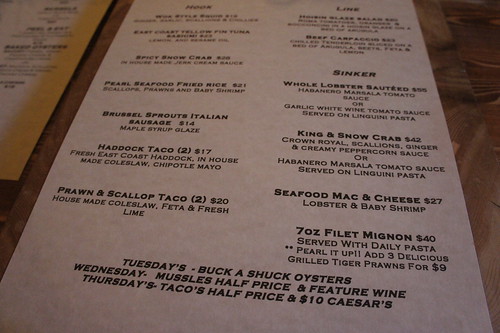 Heard good things about the regular menu but geez, $20.00 is insane for two tacos! Latin American grandmothers would probably roll in their graves if they saw these prices. Only way I’m trying these is if I’m here on a Thursday. 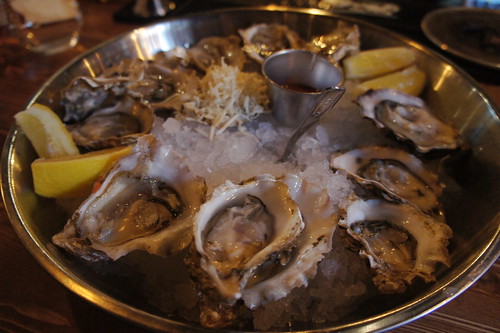 Started things off with the Nanoose Boy oysters which were delicious. Smaller than the Fanny Bay but a bit more on the sweeter side of things. Comes with lemon slices, horseradish and cocktail sauce. Add your condiments (or none if you’re a purist) and slurrrrrrrrrp up. 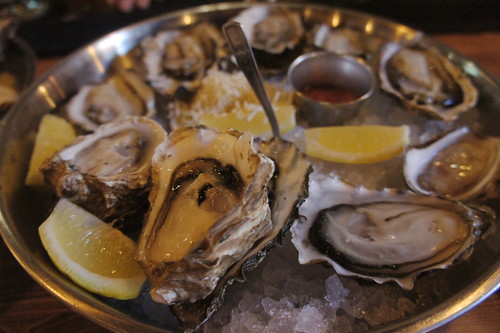 The Fanny Bay oysters were ginormous. Seriously, some of them completely filled their shells. More “meatier” than our first dozen but just as tasty. We also tried out Black Pearl’s three different sauces (in small eye drop bottles). Worth a try but I’d rather eat them without. Seemed a little gimmicky to me. 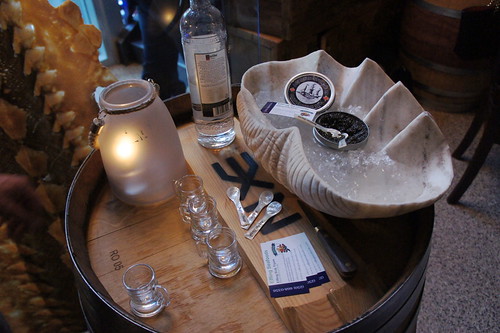 As we were winding down our after workout oyster feast, Effing Rob randomly popped in and declared to everyone in the restaurant that he was having a caviar tasting. Say whaaaaaaaaaat? Obviously, we lined up because who turns down free caviar? Interesting Vue article on Rob if you want to read more on him. 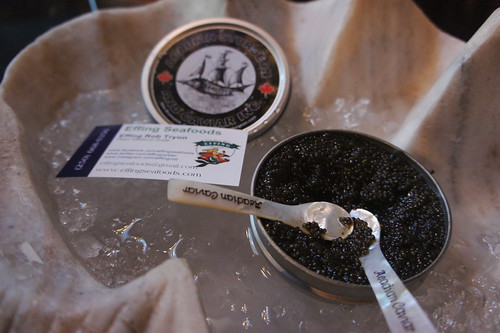 This was our first time trying out caviar and all I can say is daaaaaaayuuuuuum. No wonder people love expensive, luxurious things. The way it works is you take a sip of the vodka to cleanse your palate, then pop the caviar on your tongue and let it melt in your mouth. That’s exactly how things went down – it was literally a party in my mouth. So good. I also got a touch of saltiness at the end. We repeated the process where one older lady, who was sampling at the same time as us, wanted less. We jokingly said to Rob that we would eat her portion (obviously we would have!).

I like the vibe and chill atmosphere at Black Pearl. Great spot to grab a drink and eat some specials Tuesday to Thursday. Be smart and time when you go!