Dutch Delicious, if you can’t tell by the name, is a Dutch bakery (with some European and German influence) that dabbles in a bit of everything: fresh bread, deli meats, cheeses, pastries, coffee and imported products. I’ve actually been into their shop once before but having just ate lunch, ended up just browsing. 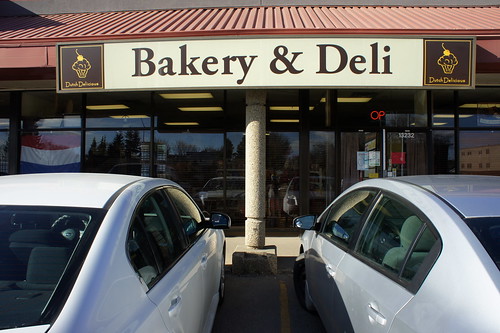 Well, I was surprised but happy to accept an invitation from DD for a peek inside their shop and bakery where all the magic happens. I met Siebe Bejohn, owner of Dutch Delicious along with one of his bakers, Elien de Herdt. Both are very friendly, humble, down to earth individuals that have a huge passion and joy for baking.

Three interesting tidbits on Siebe:
– He’s been in the business for 18 years including schooling (5 years!) back in Holland
– He starts work at 1am to make fresh bread
– He has FIVE kids – I don’t know how he does it. Remember that next time you complain about your life being hard. 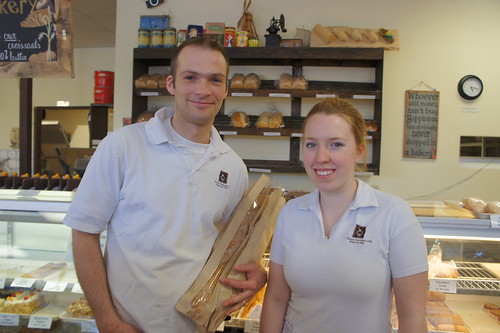 As for Elien:
– She graduated from the NAIT baking program
– She’s traveled all over the world doing competitions (sweet perk!) and is Dutch’s second full time baker. Before Elien, Siebe was doing all the baking himself.
– This Avenue article shows off her skillzz as she was a member of Team Canada and competed in the 2016 Bakery World Cup. Didn’t even know that exists! She participated in the “Young Bakery Hopefuls” category where she produced three new creations (rather than playing it safe and making a familiar item) that children would enjoy. Side note – children are picky as eff.

There’s a mural up where you can take a look at Elien’s accomplishments and where she’s gone so far. Very cool to see this type of support. 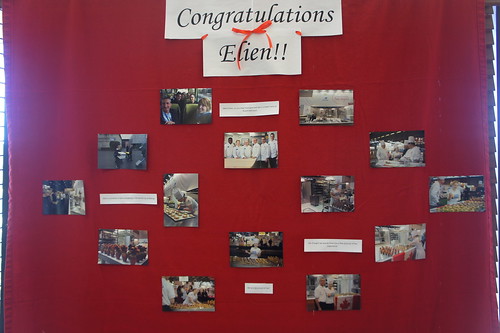 We started things off with a tour of the kitchen. Honestly, I don’t remember what each piece of equipment does (knowledge overload) but it was fascinating. 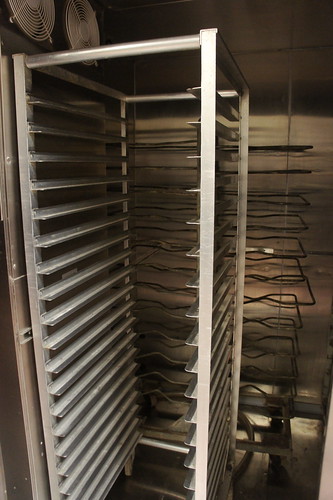 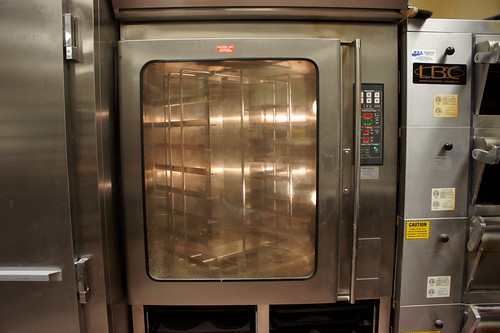 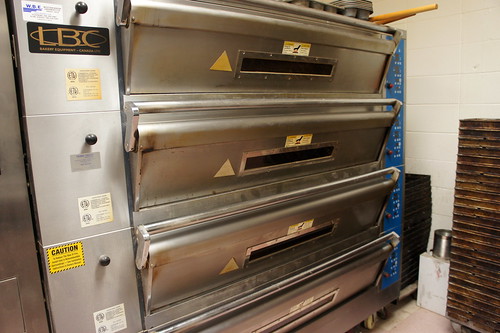 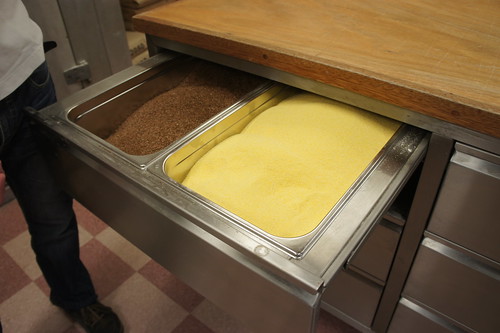 They had all these industrial sized bins underneath their main table holding numerous ingredients. The design/layout is very minimalist but well thought out. 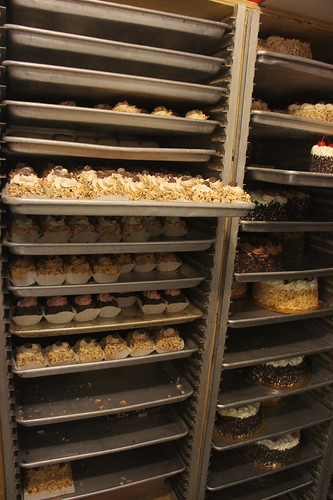 Freezer holding some of their delicious desserts. Helloooooo pastries and cakes. One thing that Siebe kept on stressing was the fact that they use real butter, whipped cream and butter cream. You know a place means business when they use quality ingredients. Best quote of the night goes to Elien – “bad for the hips, good for the lips.” 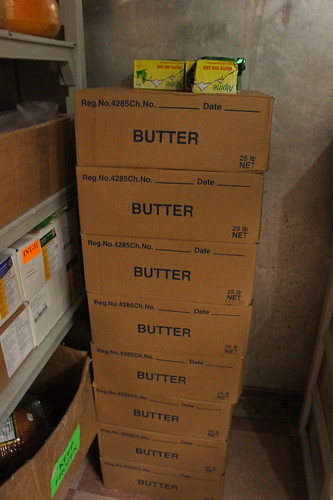 So much butter inside their fridge! To reiterate, butter = deliciousness. 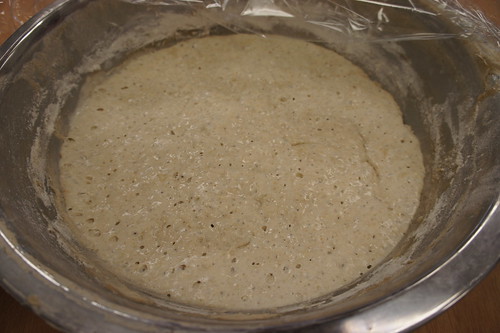 Now these things were cool. Baking cultures. This one was white (containing 10% rye). Dutch add them into their breads to give it a more complex, nuanced flavour. 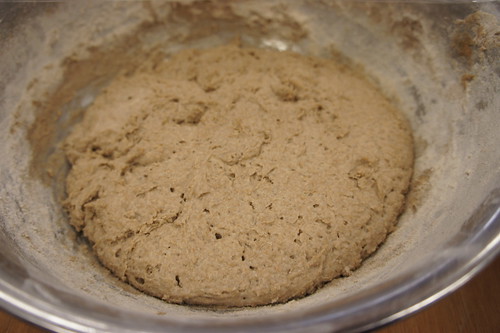 The other one was rye and had been cultivating for about 8 months. It smelled absolutely amazing. I’d buy a bottle… 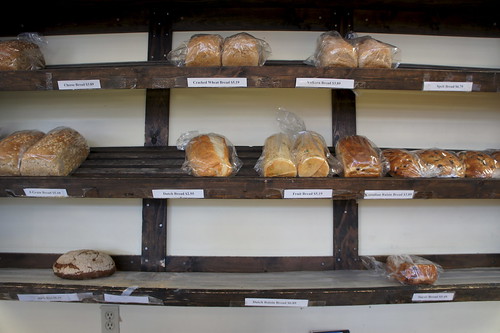 We moved outside to the main counter where you can see some of their bread offerings. It was end of the day so only a few loafs remained. We sampled: 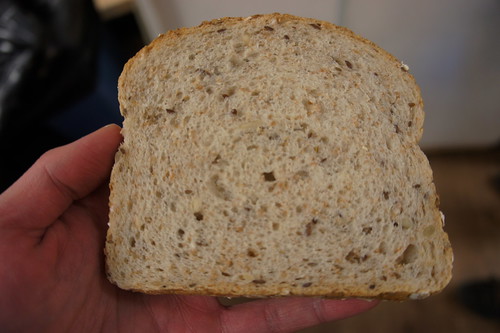 5 grain bread. Light, airy, this is bread that you’re normally acquainted with/used to. 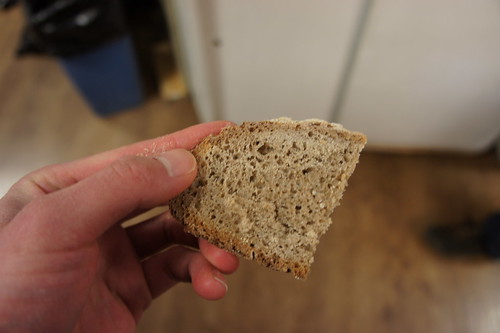 Dark rye was a completely different beast. Much “heavier” and you really have to chew it. Goes well with cheese. Another great quote – “there’s nothing like a good aged cheese with artisanal bread”. Preach, sister, preach. 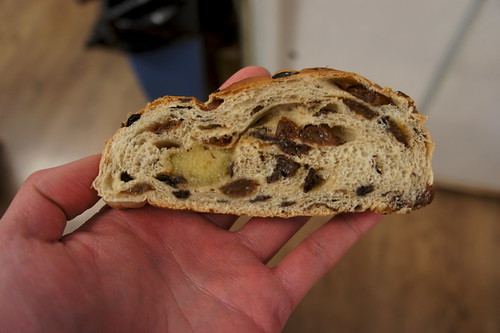 This one was my favourite: I believe it was the Canadian raisin bread. GET IT. 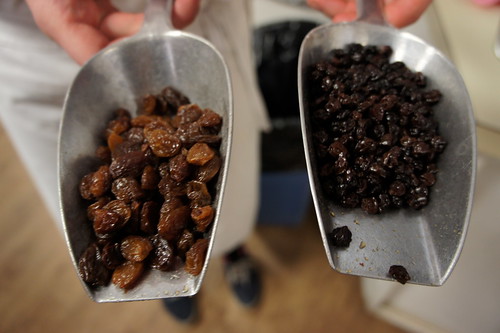 Raisins and currants from their bins. Currants add a bit more sweetness. 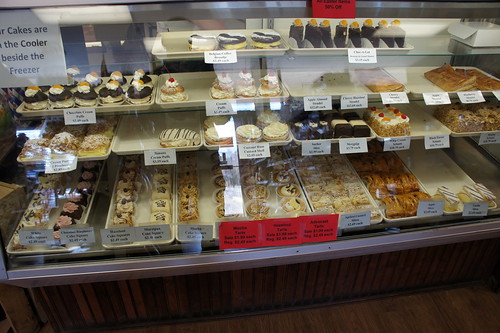 Moving on to the pastries, there is a lot of options to choose from. They also have cakes if you’re looking to satisfy that sweet tooth. What I took home from talking with Sieb – everything is made fresh, in-house with real ingredients. No shortcuts are taken. They make sure things are done the “right way” which results in everything being quite labour intensive. The saying’s true – hand made always tastes better. 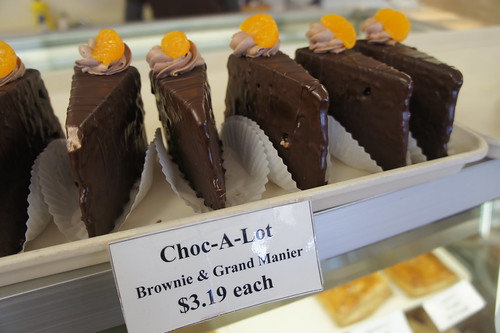 Elien picked out two of her favourite items to show us that she helped create. First up was the Choc-A-Lot. Seems like a good one for chocolate lovers. 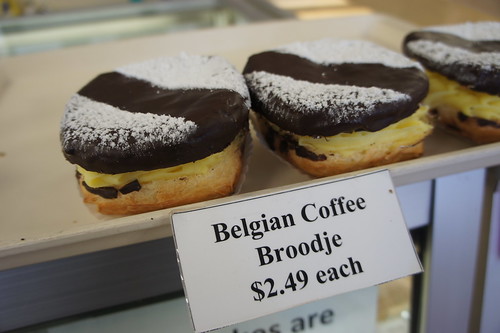 The other was the Belgian coffee broodje. Apparently goes great with a cup of joe, hence the name. 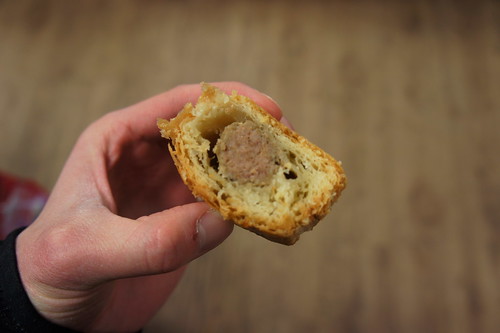 Non-pastry related but I also got to sample (last one I swear) one of their sausage rolls. Nice and flaky, again, you can taste the butter. The meat even had a nice je ne sais quo that I couldn’t quite pinpoint until Siebe told me the secret ingredient. Yum.

At this point, the tour was wrapping up but I was gifted a nice little to go package of goodies. Such a kind gesture. I had soccer practice to attend but checked afterwards to see what was in the box. 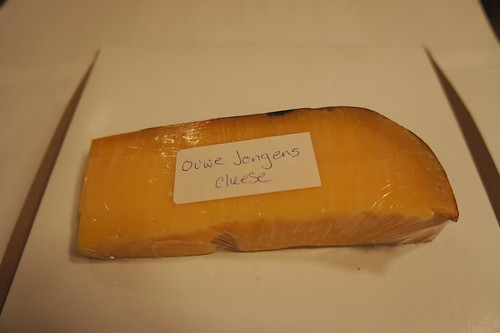 Ouwe Jongens cheese. I’m by no means a cheese connoisseur but this is a old style, strong flavoured hard cheese. This will likely last me awhile. 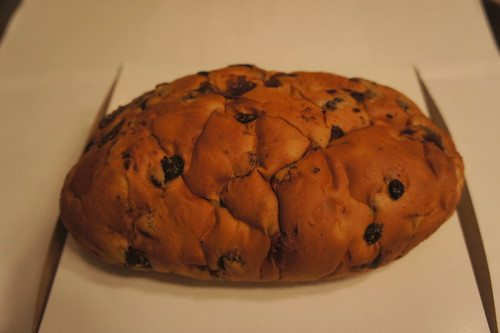 Raisin bread. Bring me back to my childhood, except I wish I was eating Dutch’s version instead of Sun-Maid’s crappy raisin bread. 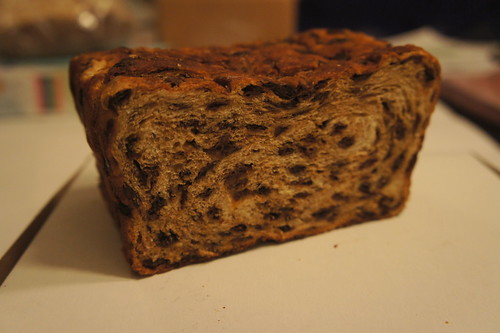 Closeup, look at all dem raisins. Soft, chewy and filled to the brim with raisins. 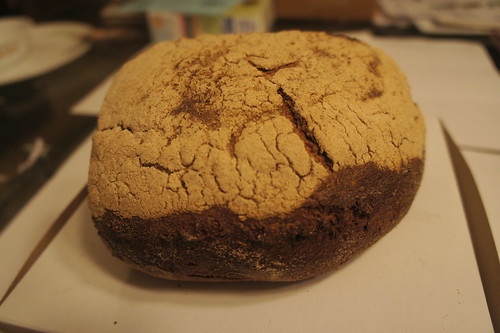 The rye bread comes whole. Make sure you have a hefty bread knife to cut this bad boy. Otherwise, you’ll be getting a good arm workout. 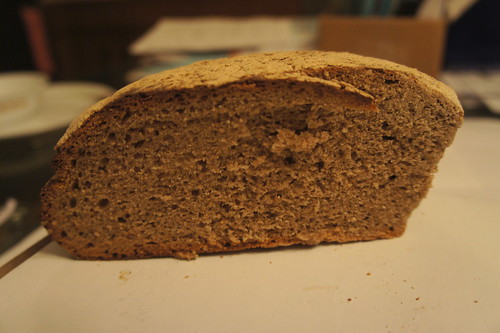 Closeup of the rye. Beauty. If I recall correctly, it takes almost two hours to bake! 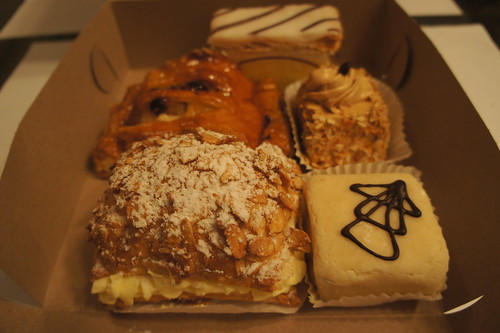 Where to start? If you like pastries, you’ll be in heaven. What I liked best was how everything tasted fresh and creamy without being too rich/sweet. I felt like I could eat another pastry right after devouring the first one. 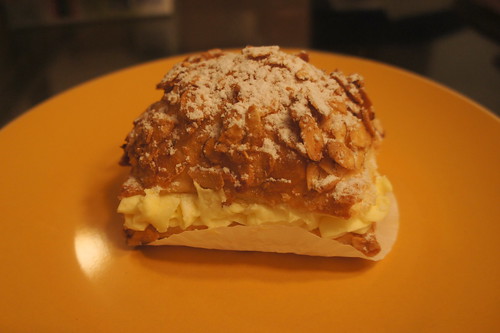 The cream pastry was delightful. Light and airy, the filling was just divine. Don’t make me choose but I think this was my favourite. 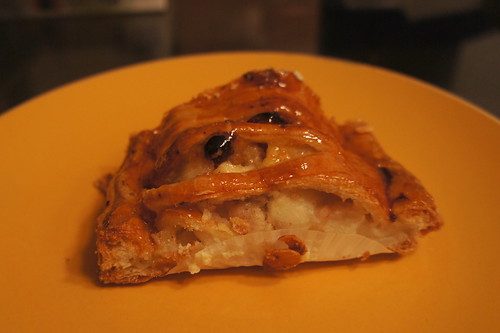 Another winner was the apple slice. Reminded me of a turnover but sooo much smoother. The addition of raisins gave it the perfect balance of sweetness. 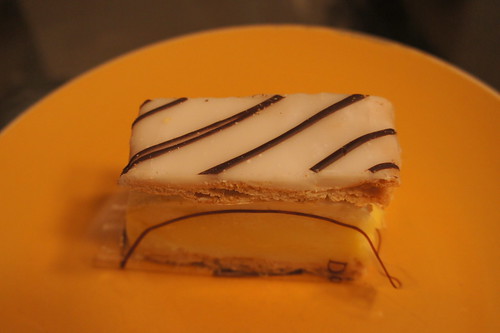 Vanilla slice, my mom thought this was like a mille feuille. Incredibly light, creamy, this is one of their most popular for a reason. 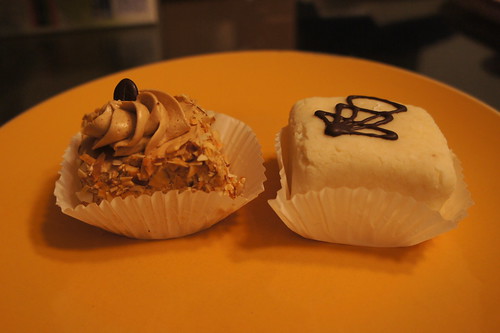 Seriously, sooooo goood.  I preferred the mocha over the marizpan square.

Can’t wait to go back and try a slew of new things next time. Thanks again Dutch Delicious and crew for the treats, hospitality and insight!