Daravara is for better words, a gastropub, tucked away in a corner of a mini strip mall area along 124 Street. We were stuck working during the end of December so two co-workers and I decided to celebrate an empty office by going out for lunch Wednesday afternoon. 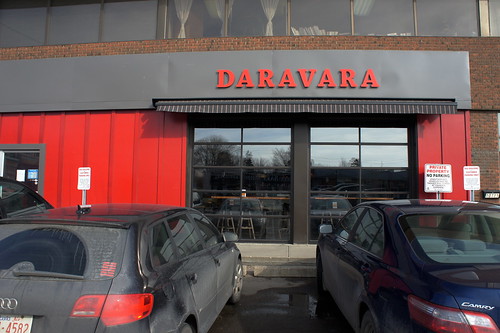 Daravara reminds me of a hybrid between The Empress Ale House, The Next Act and Dadeo’s (specifically their po boy on the menu and style of fries). The inside is decorated in an open air, industrial style with Jameson bottles doubling as lights, exposed brick painted red and two dartboards unexpectedly set up along one side of the restaurant. 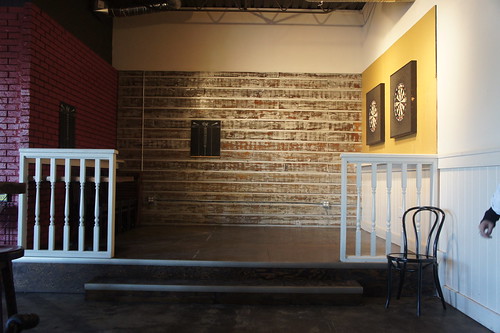 Didn’t realize that they have such late hours (midnight from Tuesday-Thursday and 2am Friday-Saturday!) so I’ll keep them in mind next time we’re on the lookout for a late hangout spot. Their music was good – there’s even a DJ booth! 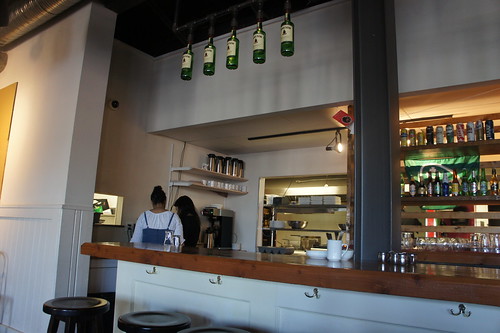 The service was okay but our waitress didn’t tell us what the special of the day was (it was Mexican corn chowder) until she wrote it on the blackboard. By then, we’d already ordered. She gave us some excuse about not knowing if there was any left which had one of my co-workers questioning if it was scraps from yesterday. Guess that might have been the case because we were there right at noon and they open at 11:30am. My co-worker asked a few other questions but she got short, tight lipped replies. Either the waitress doesn’t know or care about informing customers about details. 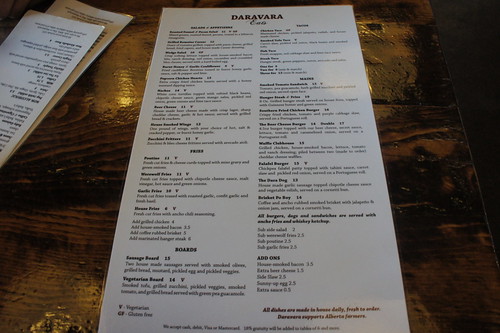 The menu is split into appetizers, fries, boards, tacos and mains. 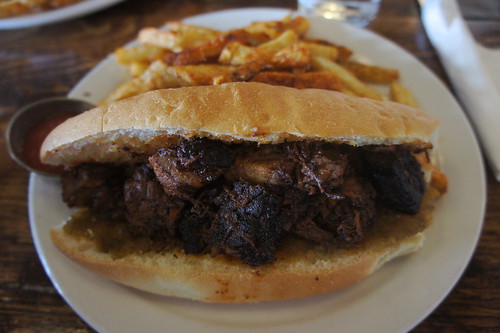 Coffee and ancho rubbed smoked brisket with jalapeno and onion jam. The brisket was moist and tender but there was quite a bit of fat on it. Big enough that I took a couple pieces out of my po boy. I didn’t get much, if any, coffee flavour but it was still pretty tasty. The jalapeno added a nice little zing. The fries were pretty average as they weren’t crispy enough but one co-worked loved them. The whiskey ketchup is homemade but I found it lacked any real punch. It tasted almost watered down. 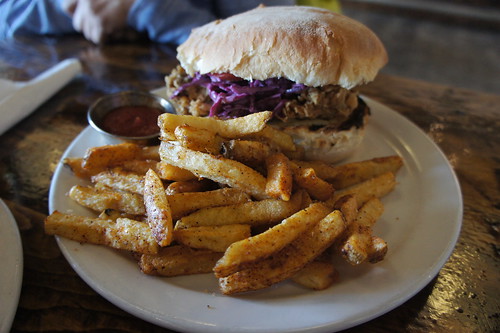 Crispy fried chicken, tomato and purple cabbage slaw. We shared so I was able to taste all three of the dishes we ordered. I think the fried chicken burger was my favourite. Great crunch, crispy texture without any greasiness to the chicken. The purple cabbage gave a nice contrast and freshness to the burger. Yum. 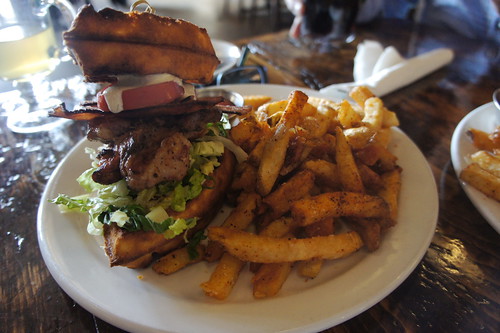 Apparently, they open up the storefront (garage style) in the summer so it’s a perfect place to chill and enjoy a beer on those warm sunny nights. If you’re a bruncher, it runs on the weekends till 3pm. Their style reminds me of Canteen but Daravara is going more for a chill, late night neighbourhood pub vibe. You won’t be blown away by the food but you’ll leave satisfied.