There are a lot of good Lebanese/Middle Eastern restaurants north side, which is conveniently located near (close enough) to my work. There’s Pitabake and one of my all time favourites, Sunbake Pita, which we frequent often (helloooo corn nuts). Well, I’ve heard about Castle Bake for some time now but always thought it was a bit too far to go for lunch. Turns out it’s only a 10-12 minute drive so I decided to check it out with a good buddy of mine. 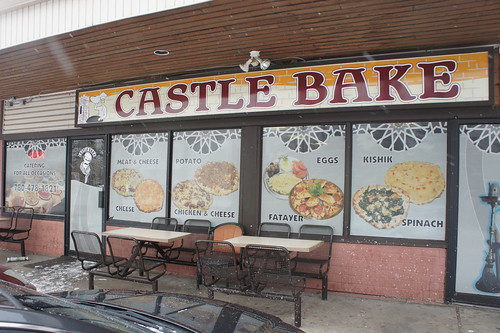 We headed over on a Friday afternoon for lunch and wow, this place is in the most random spot. Smack dab in the middle of a Castledowns neighbourhood. But trust me, it’s worth the drive out to the middle of nowhere. The inside is quite spacious with a couple TV’s (showing everyone’s favourite past time, darts), a cooler filled with some interesting drinks (mango nectar, Barbicon non-alcoholic beer and ayran (salted yogurt)) and shisha if you’re into smoking hookah. 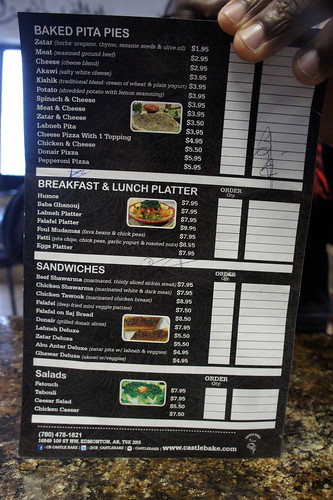 The only menu is a little take out sheet which consists of baked pita pies, breakfast & lunch platter, sandwiches and salads. Simple but lots of options under each category. 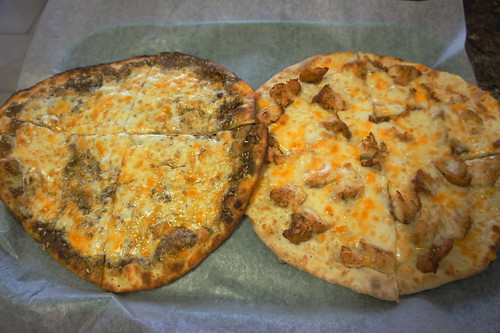 The pies are tasty and pretty generous in portion although much more on the greasy side compared to Sunbake Pita. The zatar and cheese was my favourite of the two that we ordered. 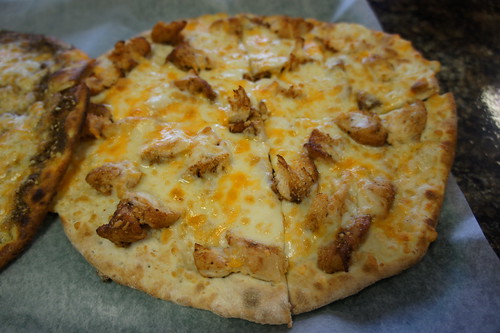 The chicken and cheese was a bit on the dry side. 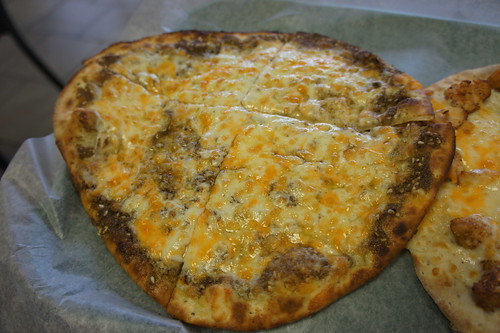 There’s something about zatar and cheese that is just delicious. Definitely order at least one or two pies if you go. 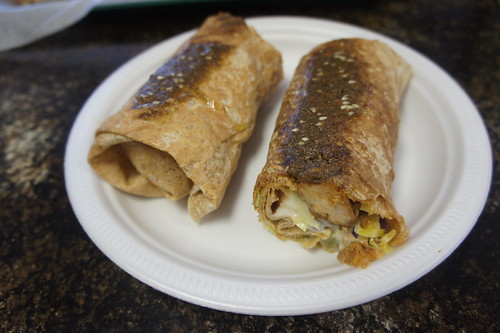 Marinated chicken breast. This sandwich was boooooomb and the chicken was oh so sweet and tender. I believe they lightly crisp the sandwich on a press at the end – pure genius. Reminds me a bit of how High Voltage does the same thing to their gyros and donairs. All I know is it moves their pitas to the next level. They slather a bit of zatar spice on the top which adds even more flavour. 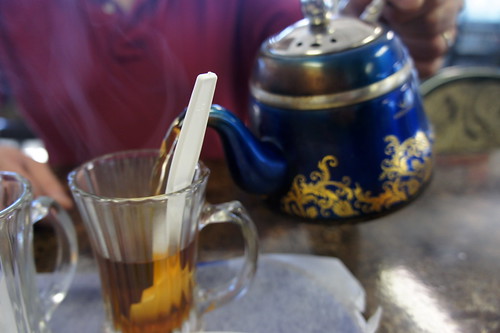 Comes in a beautifully crafted pot. Nice and hot, flavour profile is pretty subtle. We saw some tables adding sugar to give the tea some sweetness but I liked it as it was. 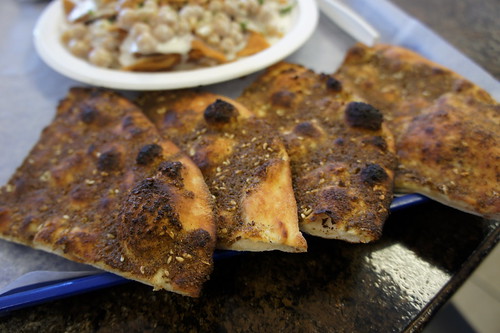 You can’t really go wrong for $2.00! Soooooo cheap. I don’t know how they bake their pitas so perfectly. This is simplicity at it’s best. 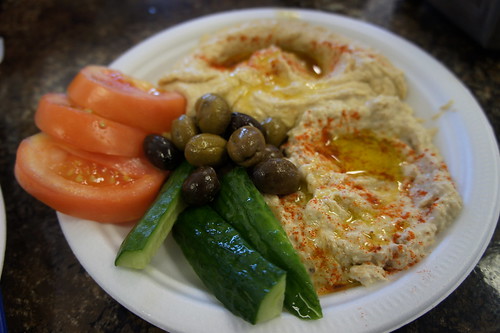 I wanted to get half portions of the baba ghanouji and humos but I believe they charged us for each one separately. Bah. Oh well, at least we can say we tried both. The baba ghanouji was interesting – definitely nothing like you normally expect this eggplant spread to taste like. This one had a slightly burnt, with hints of bitterness to it. Dbone wasn’t a fan. The humos counteracted the ghanouji although this one was pretty mild in flavour. Don’t expect any lemon or garlicky taste to this humos! For the price, I would go with the platter instead (see below). 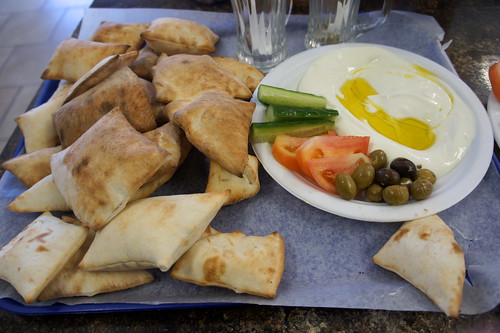 If you order any of the platters, they throw in a fresh batch of soft, airy, pillowy, get in my belly pita bites. It’s not on the menu per say but the guy working the front said he would throw them in. Show them this picture to ensure you get them. 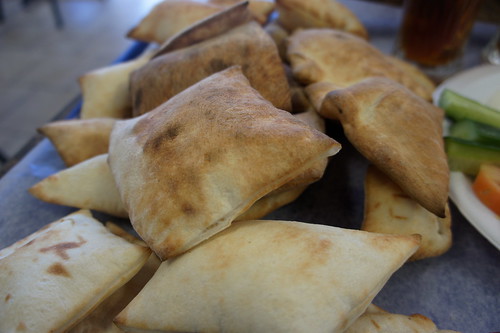 I saw some families getting these last time and I was like I neeeeeed to eat these next time no matter what. They’re that good. 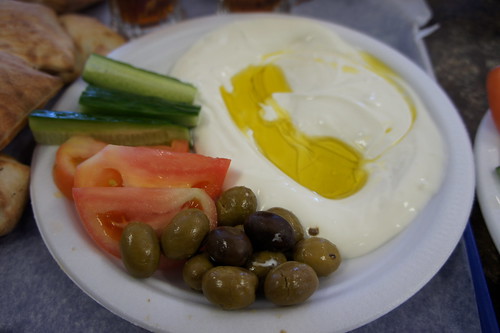 If you’ve never had labneh, it’s essentially strained yogurt. You get a bit of sourness, even some sweetness, it’s creamy, light and refreshing. Really interesting. They make their labneh fresh in-house. They also add a couple slices of tomato, cucumber and olives to round things out. The olives were sadly not fresh and the taste suffered accordingly. 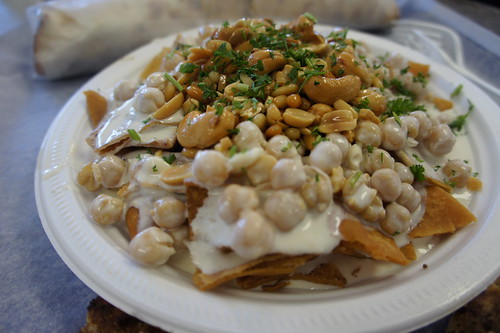 Pita chips, chick peas, garlic yogurt and roasted nuts. Never had this dish or seen it before but it’s absolutely delicious! I’m not a huge chick pea fan but this dish would convert me to eat these everyday. The mixture of chickpeas, cashews, crunchy pita chips and a sprinkle of herbs was a wonderful balance of flavours and textures. The fact that there’s roasted cashews in here should already have you sold. GET IT. It’s almost like a salad, which we were in desperate need of based on our carb heavy ordering (oops, my bad).

Abu antar deluxe ($4.95)
Zatar pita with labneh and veggies. I could only manage a bite but this pita had tomatoes, olives, mint, labneh and a nice zatar spread. Again, a great combination of balanced, warm, comforting flavours.

If Castle Bake doesn’t fall under hidden gem, then I don’t know what does. Worth the drive – hey, apparently the north side doesn’t suck (much)! Friendly staff, great food and great prices. Bonus, they have a couple chairs to sit outside if you want to steer into the desolate parking lot.