LOVEPIZZA seems to have taken Edmonton’s “foodie” crowd by storm. Almost all the reviews I’ve read have been positive and with a lack of quality pizza options in town, I was happy to hear things were going well so far. We decided to give them a try for dinner Thursday evening and arrived around 6pm. It didn’t feel busy but there was a constant flow of people coming in and out, with most people taking their pizzas to go. 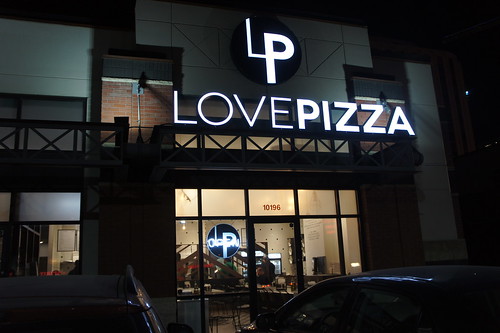 I have no idea how this used to be a Planet Beach Tanning salon but I will give Lovepizza credit where credits due. They’ve made the space their own with a slick black and white look. The layout is spacious and gives off a casual, laid-back vibe. It’s not fancy here but geared towards being a quick grab and go spot over your fast food alternatives. Guess that makes sense as one of Lovepizza’s co-owner also owns all the Press’d Sandwiches spots. 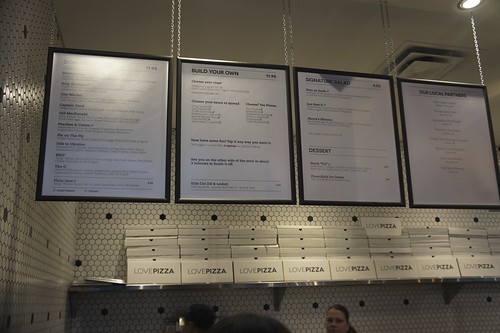 Here’s where things got weird – we were waiting in line to order so I decided to take a few pictures. I take one photo and this one lady, who I originally assumed was the co-owner (but am pretty sure was just a worker) says you’re not allowed to take any photos unless you specifically ask her. What?!? That’s never happened ever. Okay, technically once in Calgary but that place specifically had signs up saying no photos allowed. Either way, I obliged so if you want to see photos, check out a few other reviews (here or here). 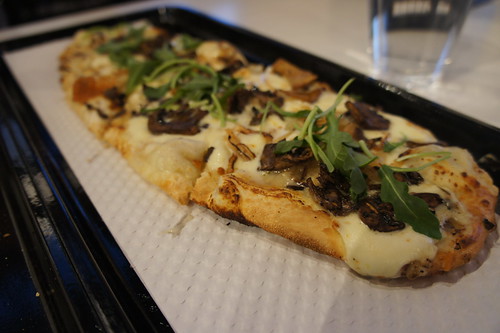 Truffle parmesan sauce, fior di latte, roasted mushroom blend, caramelized onion and fresh arugula. This one was our least favourite. The mushrooms were bland, almost tasteless and I didn’t get a hint of the truffle parmesan sauce. You know it’s bad when you have to constantly drizzle chili oil and add chili flakes to give the pizza any real flavour. 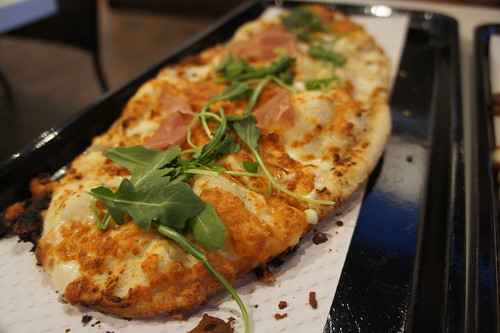 Truffle parmesan sauce, quattro formaggi, prosciutto and fresh arugula. We liked this one the best but wow, talk about cheaping out on the toppings. There was barely any prosciutto on it. Seriously, not impressed especially when I think back to how generous Spinelli’s prosciutto arugula pizza was. 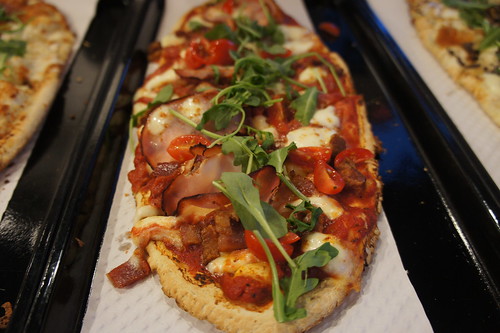 Tangy tomato sauce, fior di latte, Irvings Farm bacon, back bacon, fresh arugula and cherry tomatoes. J liked this one but I wasn’t a fan of the sauce. The tanginess didn’t compliment the rest of the ingredients. We both agreed that the traditional caputo “00” dough that they use is great – everything else was average.

For the price, I’m not sure why everyone’s raving about how cheap it is. Sure, you save $5.00 on you’re first visit when you sign up for their loyalty program which my buddy used to get a Grizzly Paw beer ($5.99) with his meal. But if we had only ordered one pizza each, we would have still been hungry. Likely hangry. We ate three pizzas between the two of us and had no leftovers.

J said he’s in no rush to come back and said this place reminded him of a “Quizno’s if Quizno’s were to serve pizza”. This coming from a guy who will eat everything – guess I’ve been spoiling him too much with all the ethnic hole in the wall places we’ve been going to lately. My other bud L that went recently wasn’t impressed either – he described the pizza as blah. His exact words, not mine. Maybe I’ll be back again for free birthday pizza…but probably not.