Don’t you just love when restaurants open up and you can’t find any info on them? No website, no social media outlets, a whole lotta nada. I’ll never understand it. Well, we spotted the “coming soon” Washoku Bistro sign awhile back and noticed that it had finally changed with a January 12th grand opening date. Bbops wanted to go on opening night (does no one ever listen to my advice???) but we were able to convince him that it wouldn’t be the best idea. Turns out we were right as I read a few reviews of people complaining about opening night service/jitters. 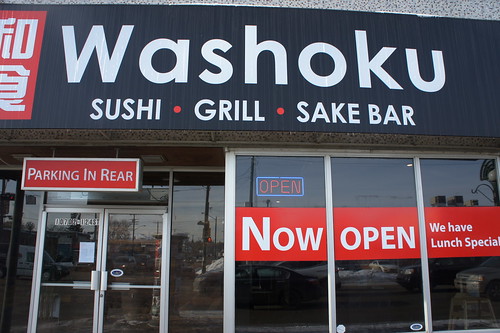 Well, we both forgot our lunches the following Thursday so we decided to give Washoku a go. I went in keeping any type of expectations in check after having way too much belief/hope in another Japanese restaurant, Ikki Izakaya. Service was acceptable although we both found it odd that the waitress thought all the rolls had such “interesting” names. I kid you not, that was verbatim. Ummm  you’ve never heard of a red dragon roll before? Do you live under a rock? Makes me wonder if she’s ever worked in a Japanese restaurant before…or eats food for that matter. 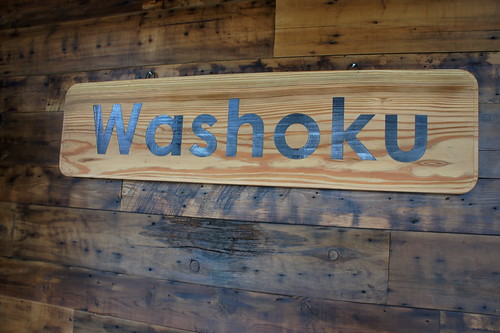 Located right beside Relish Burger, they’ve taken over what was once a fast cash store. The inside is nicely decorated with a modern, clean and simplistic design. Apparently, we know where to go because we spotted some “celebrity” food bloggers. Hahaha, good timing apparently. Our food came out fairly quickly which was nice as we were in a bit of a rush to be back to the office. Typical hours. Closed Monday. Evenings aren’t open very late (4pm to 9:30/10/9pm). 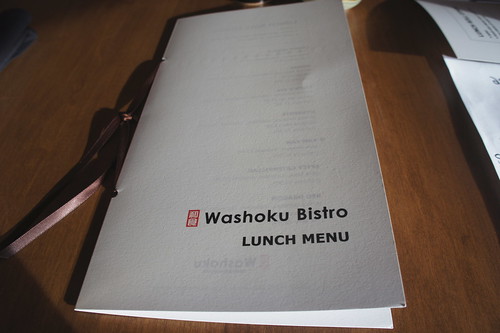 They have a small lunch menu that’s split into lunch roll combos, bento boxes and stir fried bentos. Bibimbap is an option???? Huh? Guess that’s where the Korean dishes come into play but I’m really not gungho when a restaurant tries to combine two completely different types of cuisine. 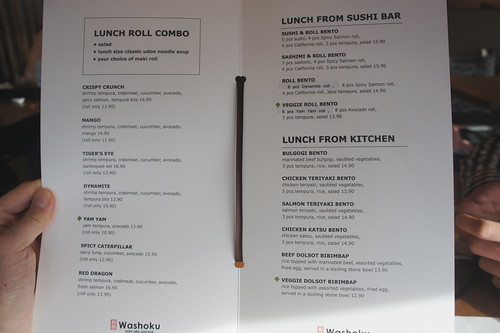 It looks like there are a lot of roll combos to choose from but almost all of them consist of the same ingredients. A greater variety would be nice…rolls aren’t that difficult to make. 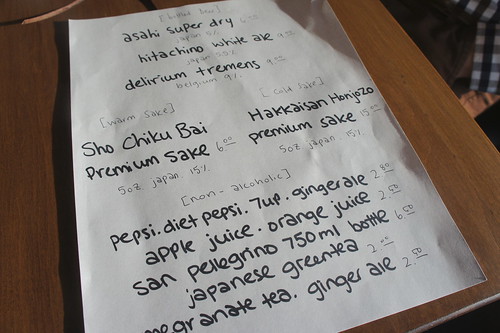 Drink menu. I read their pomegranate tea is to die for – maybe next time. We were given complimentary miso soups to start. Nice and hot, we drank them straight from the bowl. Pretty standard stuff but a good way to start our meal off. 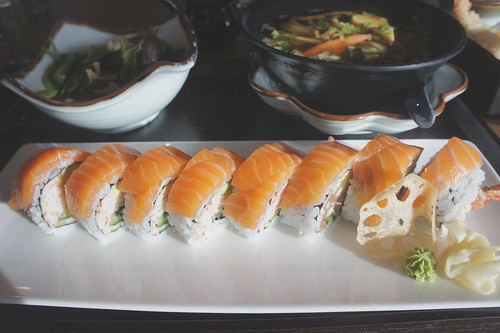 Shrimp tempura, crabmeat, cucumber, avocado and fresh salmon. The lunch roll combo consists of 8 pieces of maki rolls, a salad and a lunch size classic udon noodle soup. This was my dish and the first issue I had was that the rolls were waaaaay too big to eat. Seriously, why??? Never a fan when I see this. Hope they fix it ASAP. The rest was fine but pretty ordinary. 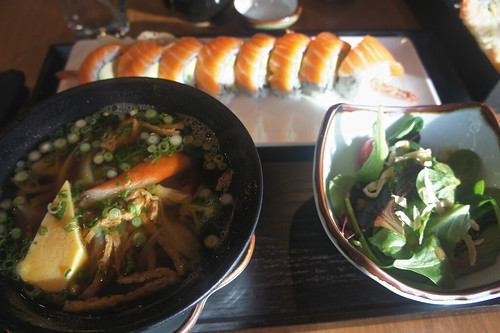 The spinach salad was tasty (ponzu dressing – yum) but the udon noodle soup was just decent. There wasn’t much ingredients in the bowl – just one piece of fake crab, tamago, tempura bits and green onions. I should probably mention I went to Marukame Udon recently, which is a completely unreasonable comparison but if you want to know what fresh udon tastes like, keep them in mind the next time you visit Hawaii. 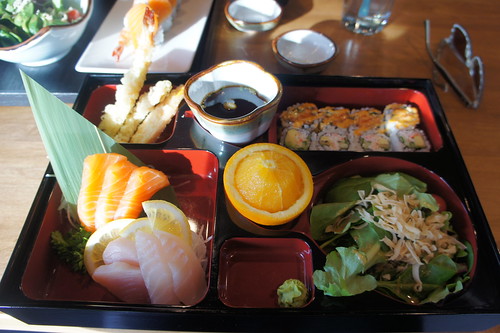 7 sashimi pieces, 4 spicy salmon roll, 4 California rolls, 3 tempura pieces and a salad. They gave us salmon and tuna sashimi, which were pretty fresh. The salmon sashimi was probably the best thing we ate. The spicy salmon was also better than I expected. The rest was standard fare. We both thought their bentos are pretty pricey for lunch (overpriced even?) but they were packed for lunch so everyone else must think this is a good deal or something…

Overall? We liked the décor and ambiance of Wishoku. The food was pretty standard fare, nothing really wowed or impressed us. Don’t get me wrong, there’s nothing wrong with Wishoku Bistro but with Japonais Bistro just a few short blocks away (and with a higher quality, better valued lunch menu), Washoku needs to step up their game.