After grabbing some delicious bubble tea, we were looking to try some fresh fish from Maguro Brothers but I didn’t have the exact address with me. I knew I was close but just didn’t know which exact fish market it was. Tip – it’s actually the one where all the fresh fruit/bananas are being sold outside. As we were walking around, my sister spotted Golden Palace and their $2.49 all day dim sum signs. The guy working the cashier ended up pointing out where Maguro Bros was (it was just around the corner) but we decided to stay and try a couple of their dim sum dishes. Poor decision on our part. 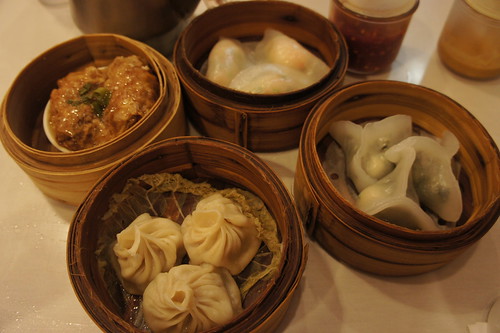 Everything was pretty mediocre. The XLB’s were surprisingly decent except for that they didn’t give us a spoon or vinegar dipping sauce – the soup broke when I tried to pick them up. Grrr. Both dumplings weren’t anything special and the foo juk was pretty meh.

The worst part was at the end when we were about to go up front to pay our bill. The waitress came up to us and kept on telling us to leave a tip at the table. I guess they don’t get anything if you tip at the front. Not that she even deserved a tip unless you count giving us dirty dishes and handing us our four dim dishes from the cart in an empty restaurant as service…

Can’t say I would ever come back to this place even with the cheap prices. Food wasn’t fresh and the place looks completely outdated and depressing. Don’t even ask my sister about the cleanliness of their restroom. 😉