I loooove Northern Chinese food. It’s the only time you’ll see me recommending a Chinese restaurant, at least when it comes to Edmonton’s options. Okay fine, Shanghai 456 would make the cut but technically, that’s Shanghainese food. Either way, Wheat Garden Noodle & Dumpling Bazaar quietly opened up last month, taking over the old red house from Old Szechuan, which moved it’s digs to Whyte Ave. I first read about Wheat Garden opening up from Sharon – definitely check out her site for the latest on Edmonton’s food scene. 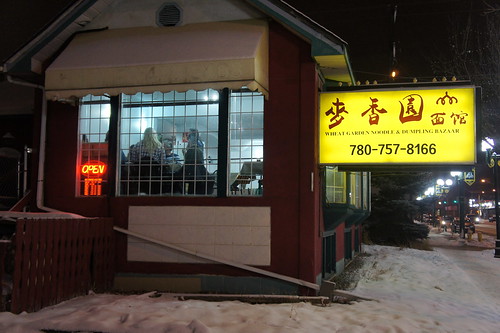 Anyways, I was stoked to hear about a second Northern Chinese restaurant opening in town! Finally, an alternative to driving all the way to Noodle Feast. 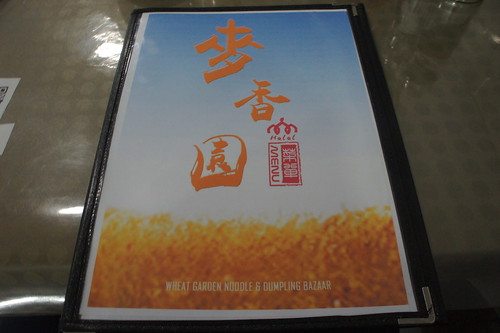 The interior received a much needed face lift. The walls are freshly painted white and gives the place a much friendlier vibe. Don’t expect too much though, there’s still plastic mats covering the tables. Typical Chinese décor. There’s also a small TV set up playing random Chinese shows that you can only chuckle at. Who cares though. Most importantly, would it live up to the glory of Noodle Feast? Read on friend, read on. 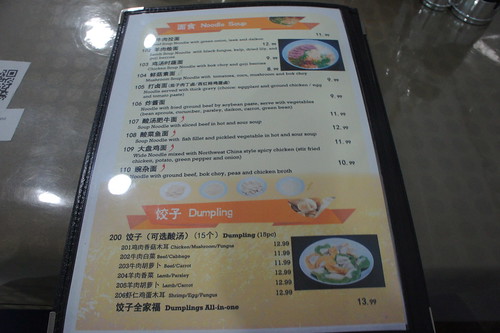 The menu consists of noodles, dumplings and snacks. What I like is that for the noodle section, there’s four different styles for you to choose from. Just tell them what type you want when you order them. Don’t forget. Go with the wide, flat ones, those are my fav (the third one). 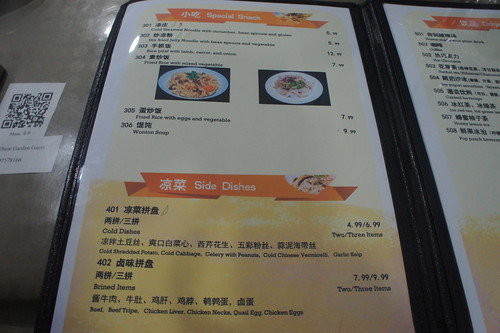 Service is very friendly. The couple (I believe) working are a bit shy but they are quite attentive. Nice that their hours changed since my original visit – they’re open for lunch now. 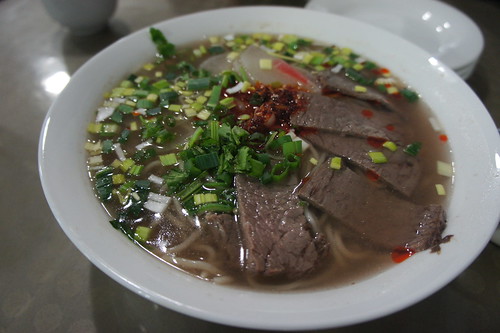 Beef with green onion, leak and daikon. The broth is simple and to me, it tastes herbal/medicinal/healthy. You won’t be blown away but if you’re looking for a bit more kick, add some of their chili oil to your bowl. 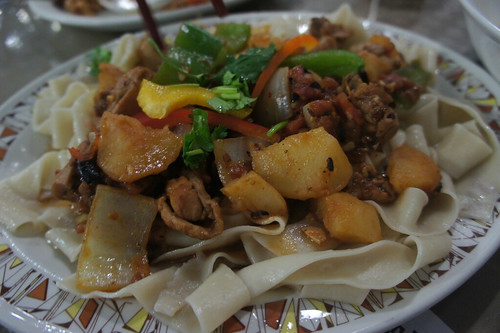 Wide noodles mixed with Northwest Chinese style spicy chicken, potato, green pepper and onions. This is one of their specialty dishes and have to say this was my favourite dish of the night. Nice bit of heat to the dish, super flavourful and the noodles had a great bite/toothsomeness to them. 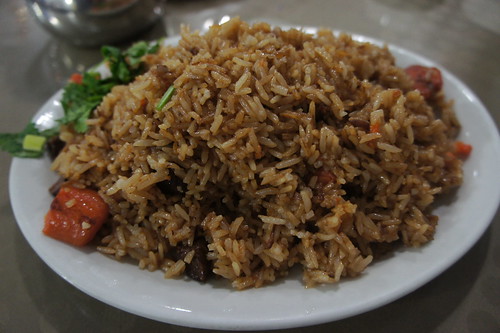 With lamb, carrot and onion. Think biryani but replace with Northern Chinese style spices. Again, another of their specialties and it delivered. Lamb was nicely spiced and flavours were just umami. 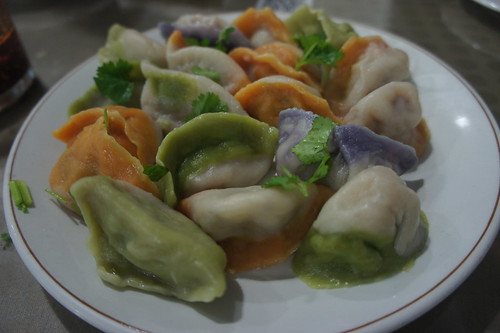 You can either pick one type of dumpling (six types to choose from) or if you want an assortment, you can go with the all in one option. We choose the latter and you get a colorful platter of dumplings, 15 to be exact. The dumplings were pretty good – moist, tender, and juicy. 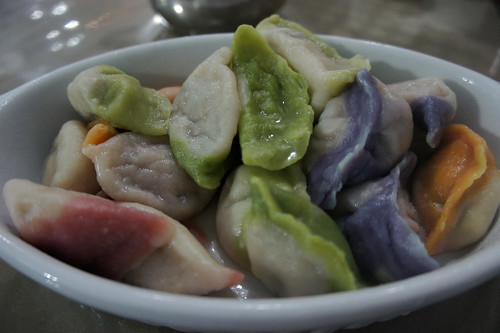 My friends liked it so much we ordered another round.

I had to come back a second time to try a couple more of their dishes before making a verdict. Bbop and I checked them out Friday for lunch. 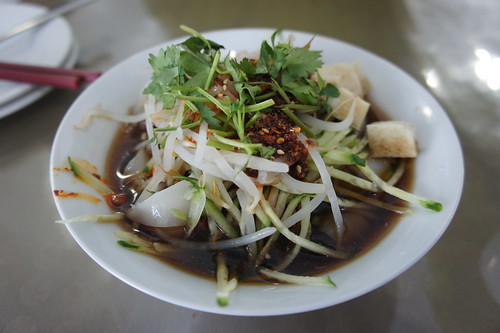 Comes with cucumber, bean sprouts and gluten. I wanted to try this on my first visit but they don’t enjoy cold dishes. Their loss, this dish was doooooooope. So many great things coming from this little dish – the noodles are perfect with a great bite and texture to them that’s different than their other hand-made noodles. Tantalizing, prepare for a bit of numbness to reach your lips. The cucumbers and bean sprouts help to cool things off a bit. 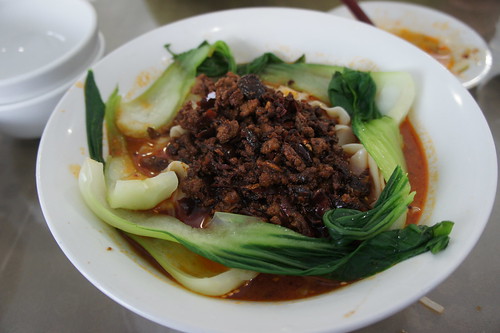 Comes with bok choy, peas and chicken broth. This noodle soup was BOMB. Our favourite dish for sure. The broth was heavenly – almost peanut like but quite light and again, the slightest level of numbness. I was pleasantly surprised as I wasn’t expecting this to even have a soup base. What I’ve learned so far – order their noodle soups with the “hot” icons beside it. 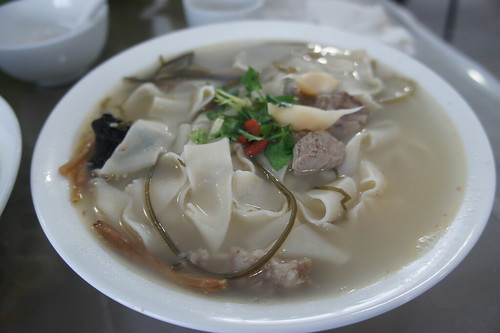 With black fungus, kelp, dried lily and goji berries. I thought this one might be different than the beef noodle soup we originally tried but the broth was identical. Bbop wasn’t a fan but at least it gave us a contrasting flavour. For what it’s worth, he kept on going back to the other bowl. I really like the black fungus and kelp in the dish. Fungus is just texturally pleasant. Kelp was new to me – it’s a seaweed, which reminded me a bit of Hawaii and their numerous algae/seaweeds that they throw into their cuisine. 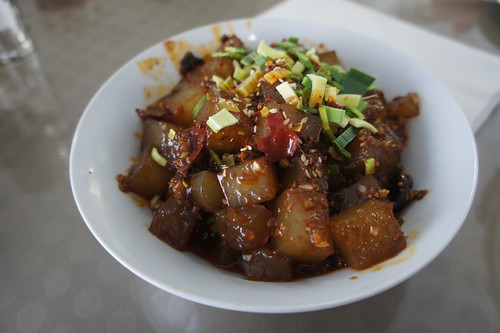 Stir fried jelly noodle with bean sprouts and vegetables. Thought they might have forgot about this one but they brought out it out piping hot. Poor Bbop, what a rookie, didn’t wait and burnt his tongue. I’m not kidding when I say it came out hot.This was my first time having this type of jelly cubes – it was more like a starch jelly. If you’ve had lo bac go (turnip cake) before, it has that same mushy consistency. Surprisingly good with the chili flakes but a half size would have been more than enough to share. Oh well, nothing wrong with leftovers.

Wheat Garden has “hidden gem” written all over it. Hope the word gets out soon and that more specialized Chinese cuisine gems starts to pop up in the future. Can someone open up a dumpling spot (a la Qing Hua Dumpling?)