Won Jung Gak claims their food to be Korean style Chinese cuisine. You’d be hard pressed to guess its a blend of two ethnicities as almost everyone in the restaurant was Korean. Seriously, everyone was Korean except our table and one of the waitresses. There were a few dishes that had a bit of Chinese influence but this is pretty much Korean all the way. 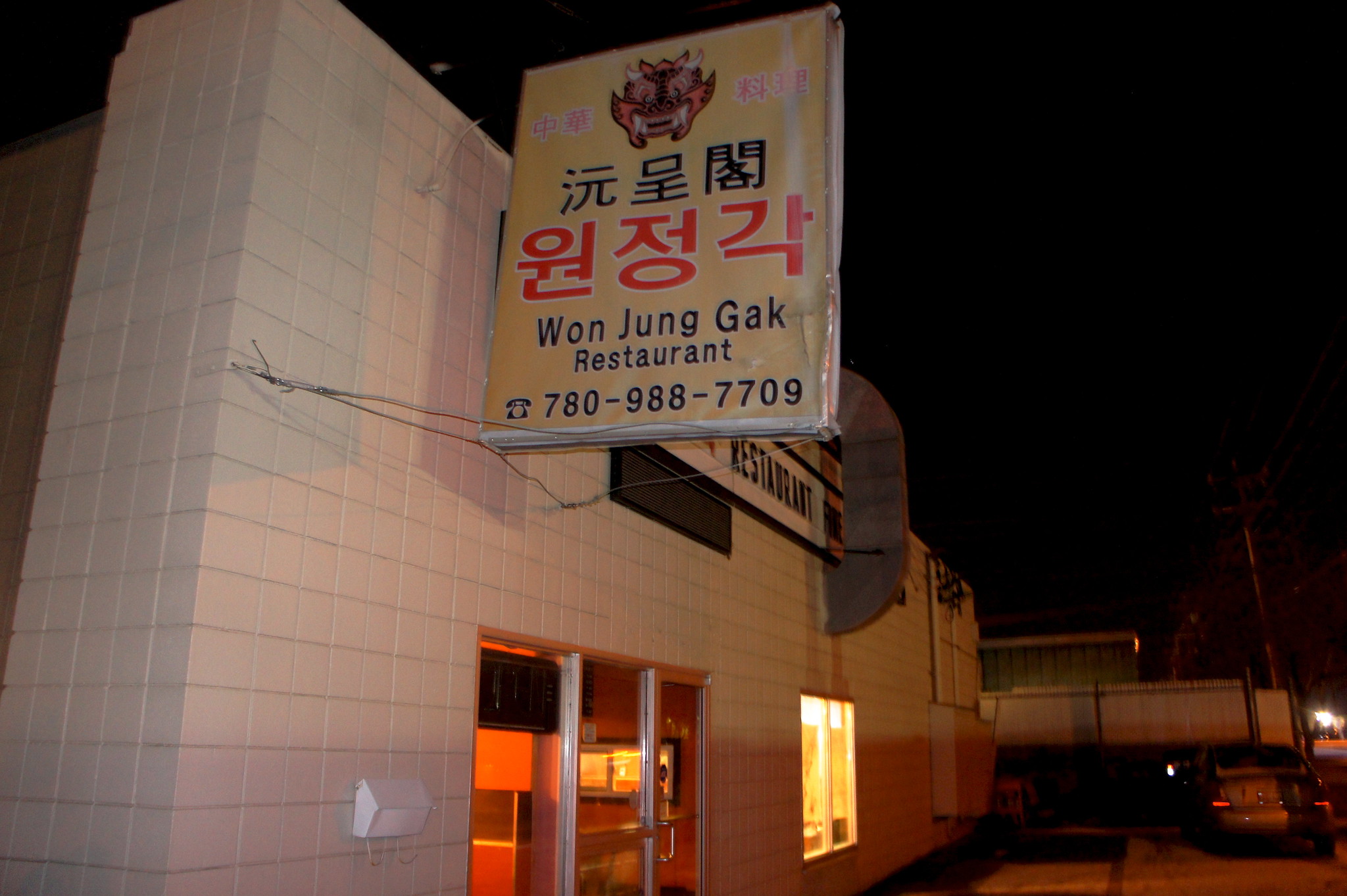 Three of us came for dinner on a Wednesday evening and the place was bumping. Not a single table was empty, impressive given Won Jung Gak’s random, somewhat sketchy industrial location. I’ve only been to their Chinatown location previously, which is defunct, but now houses It’All. The outside may look off putting but inside is quite nice with Kpop videos on loop and delicious Korean smells wafting through the room. The service is pretty weak, not even going to sugar coat it, as you’ll be constantly trying to eye or flag your waitress down to get a jug of water or a fill up of tea. Just expect that and move on. There is a call button on the table you can press for service but I’m not too confident if it works.

The menu is pretty massive but you can focus on four areas: traditional Korean dishes, noodles, rice and meat (pork and chicken). Everyone seemed to be ordering noodles, a soup dish and deep fried chicken or pork. Order what your table neighbour is having and you’ll be golden. 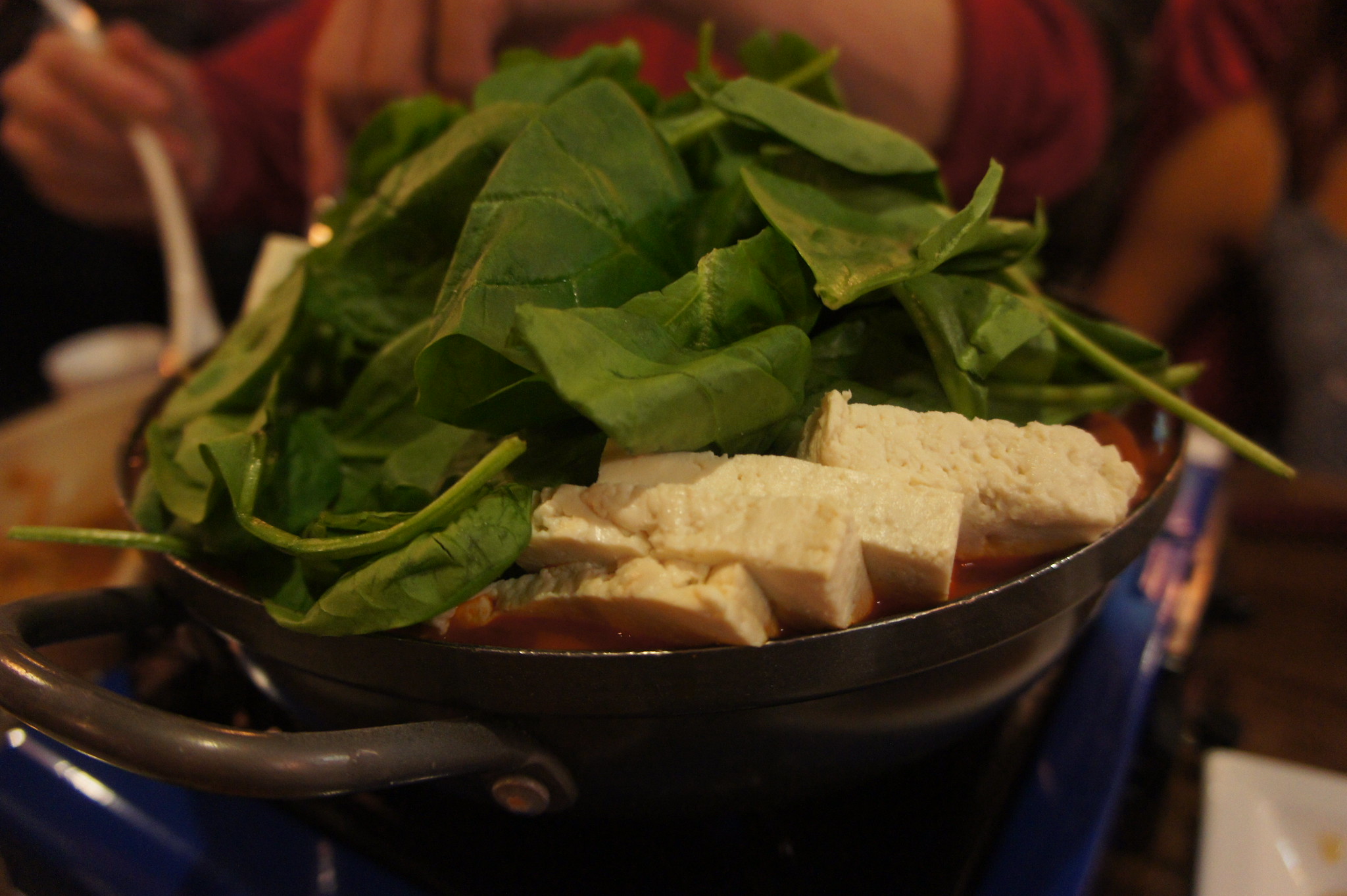 Spicy soup with tofu, kimchi, ham, sausage and ramen noodles. Came with two side bowls of rice and an extra bowl of spicy soup. I’ve had this dish several times and Won Jung’s was a bit disappointing. I like that they added spinach on top to give the dish some much needed extra vegetables. Same with the generous portion of tofu. 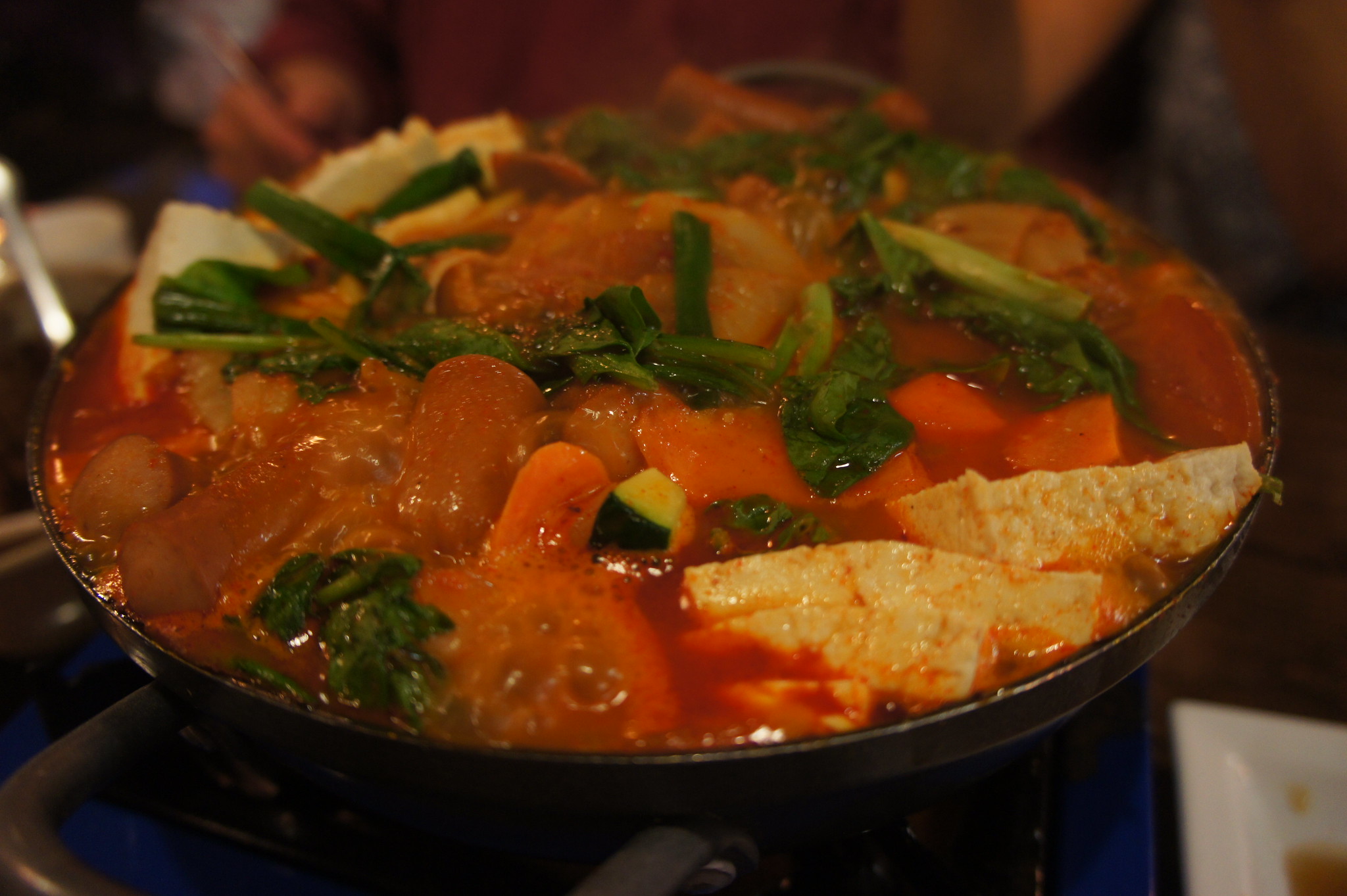 Unfortunately, the soup was way too salty. Same with the sausage and ham. I know this dish is known as army stew but the salty factor was just too prominent for my taste buds. Lee House’s broth is much better. 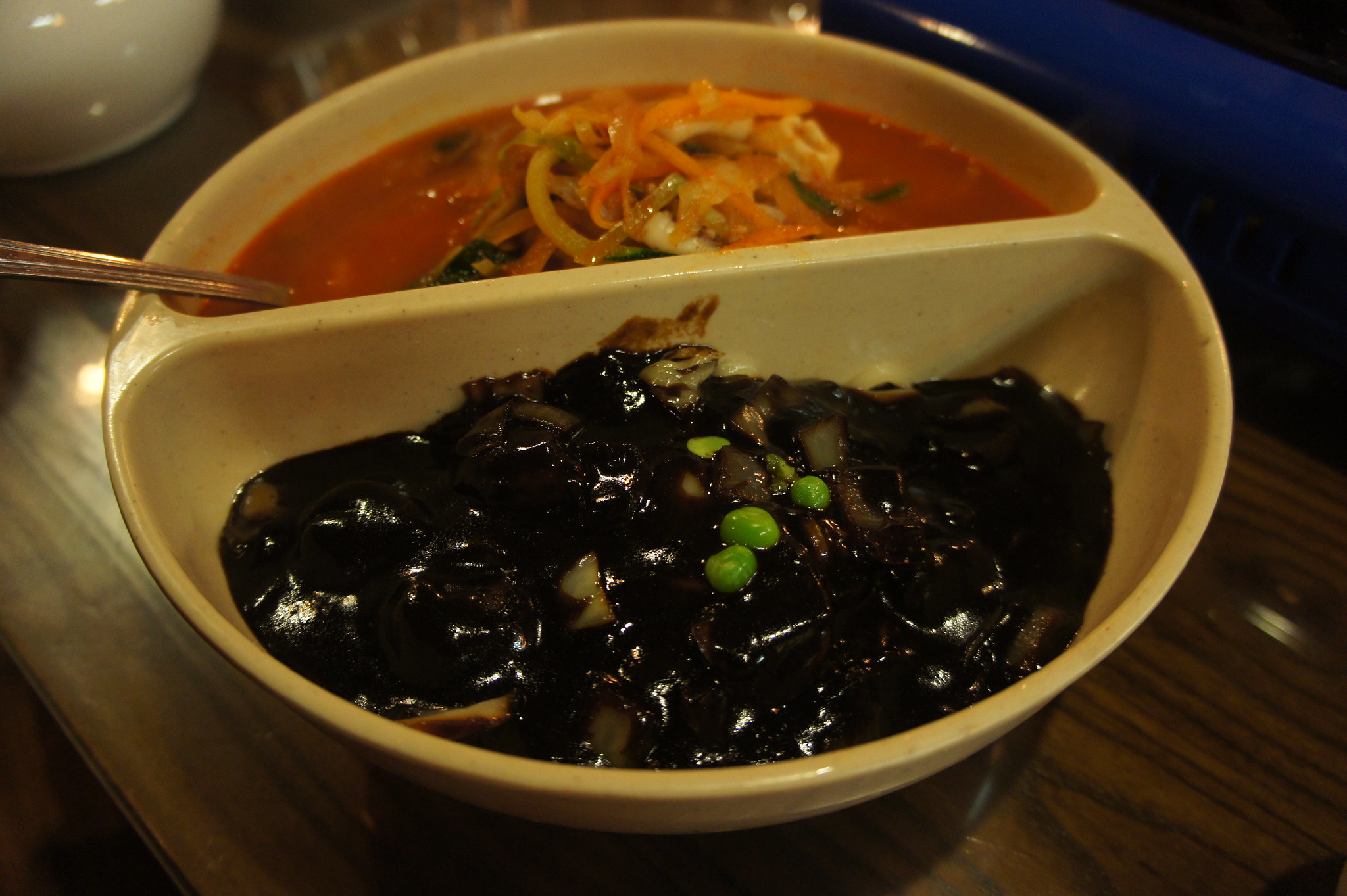 Half portions of jjajangmyeon (Korean black bean sauce with pork) and jjamppong (spicy soup with vegetables and squid). For $11, this dish is a steal, especially because you get to try two completely different types of noodles. The jjajangmyeon noodles had a nice elasticity to them but I wish the sauce was warmer when we ate it. It was lukewarm. Cue sad face. The black bean sauce was great as it wasn’t salty but had a slight sweetness to it. The jjamppong was my favourite. Spicy goodness with great noodles. It could have used more seafood but for the price, it was still worth it. Use the scissors! It’ll make scooping up noodles a breeze. 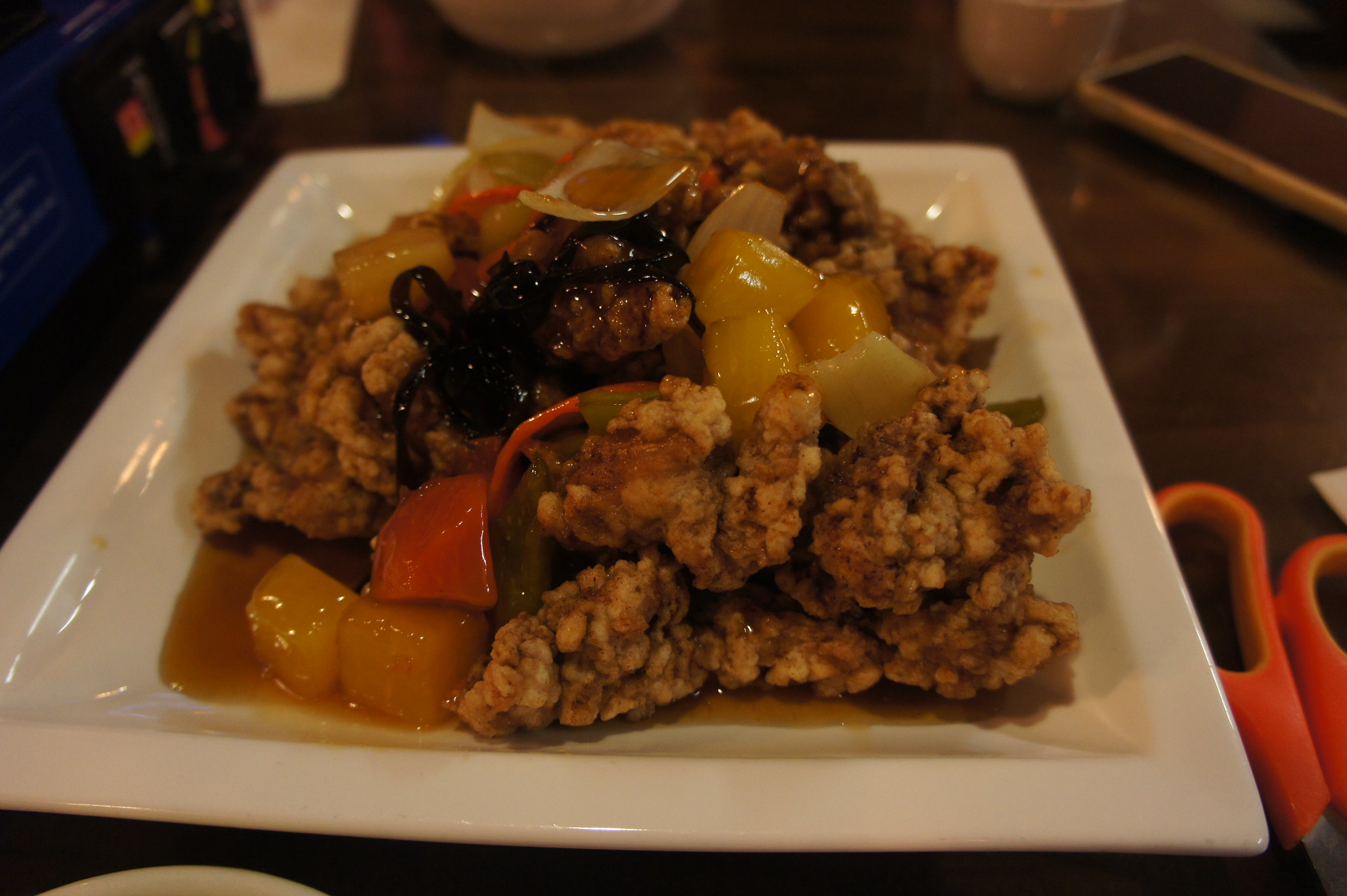 Deep fried chicken with sweet and sour sauce. This was A and S’s favourite dish of the night. The chicken had a great batter and each bite was a crunchy, can I keep popping these in my mouth delight. Sauce wise, it was much sweeter than sour (honestly, didn’t get a hint of sour) and you could dip it into the side of black bean sauce if you wanted an added twist. The dish also had some vegetables (peppers, onion and tomato) and pineapple, which I’ve never seen in Korean cuisine before. I’m guessing that’s where the Chinese influence comes into play.

Overall, Won Jung Gak is a pretty solid spot to grab Korean if you’re in the area. Seriously, I’ll never get over the fact that there’s so many places on the south side to get your Korean fix. Alas, I’m happy I tried the OG (always the best way) and prices are reasonable enough. Just be smart in what you order and you’ll be a happy camper.