So it’s been awhile since Dbone and I have gone out for lunch but we finally made it out and even tried a new restaurant. Bonus, he’s the one that suggested it – pretty sure that’s the first time ever. We decided to check out Kathir Food Experience South Indian and Sri Lankan Restaurant – in my opinion, waaaaay too long of a name for a restaurant. Doesn’t exactly roll off the tongue. 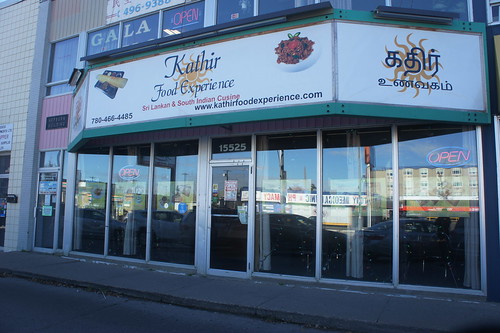 We came on a Thursday for lunch and the place wasn’t busy at all. Two or three tables were occupied and that was it. Not sure how much traffic they get as the place isn’t in the best location and their storefront camouflages with the rest of the plaza. Seriously, I drive by this area often and this is the first time that it’s caught my eye. If you’ve been to Chin Kee, you’ll know where Kathir is. Only a few doors down. It’s a one man show up front as our waiter (the only one) was in charge of everything. Wonder how he copes if it gets busy? 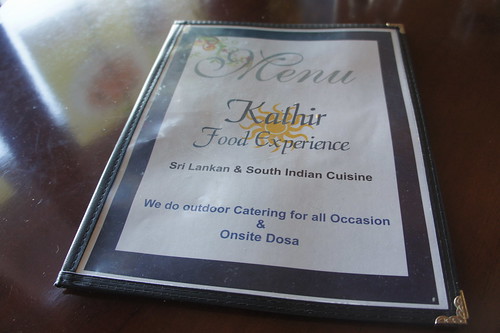 The interior is pretty mundane and clearly, the place could use a facelift. They attempt to spruce up the place with a bunch of posters hung up on the walls explaining some of their lesser known dishes and specials (Saturday – puttu, Sunday – hoppers, and Monday – idiyappam). Sri Lankan specialties hellz yes. Too bad it’s only on those days. 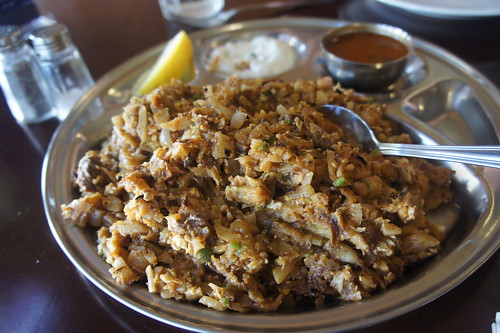 Kotthu roti consists of chopped roti mixed in with vegetables, egg, meat, and various spices. This dish was bomb – super tasty, great texture and nicely spiced. First time ordering a kotthu roti and it won’t be the last. Definitely order one. 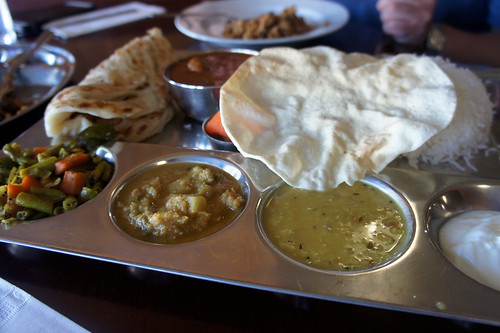 Rice, paratha, non-veg curry, three veg curry and dessert. This is one of their weekday specials (11am to 2:30pm only) and it reminded me of thali. You get a little bit of everything to sample and choose between beef and chicken as your meat. We went with the chicken which was good but we only got one measly little chicken! Lame. Nothing particularly jumps out at me of the three vegetables. The paratha flatbread was decent and denser than you’d expect. We couldn’t quite put our finger on the dessert (Dbone thought it was a carrot originally) but it was tasty. Googling, it might have been carrot halwa? The texture was great – sticky, nutty goodness.

Maybe it’s just me but while the prices are reasonable enough, it would be nice if they had some lunch deals. It would help entice more customers to come in. But I guess they must be doing just fine as they have a second spot on the south side (9318 – 34 Avenue). Either way, Kathir’s hours are crazy good (11am – 10pm every day of the week). Another good spot on the west end! The west end gems keep miraculously appearing.