Oh man, I clearly never learn my lesson. Opening day of a new place in town and what do I do (after explicitly telling another friend that we should play the wait and see game)? We go and check out the latest ramen join in town. Kazoku Ramen, which I’ve heard rumblings about for the past few months, finally opened it’s doors. Weirdly, it’s name reminds me of one of my favourite restaurants in Montreal, Kazu. So similar in name or maybe just everything in Japanese sounds the same. 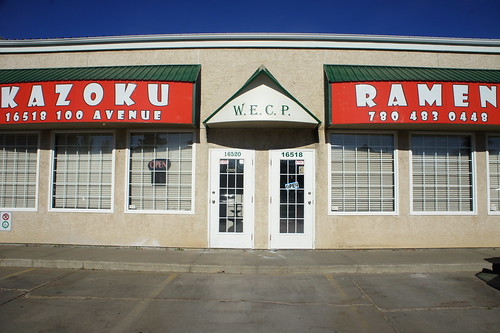 Located right across from the Edmonton Police station, you can’t miss it with it’s bright red awning beckoning you in. It’s also in the same complex as Bucas & Pastas if that’s more helpful. Bbop and I arrived around 12:30pm on opening day. The word must not be out yet because there were only two other tables occupied. Obviously, they were Asian – if you don’t have any Asian friends, you should re-consider the poor choices you’ve made in life because they know all the latest/greatest/hip places to check out. 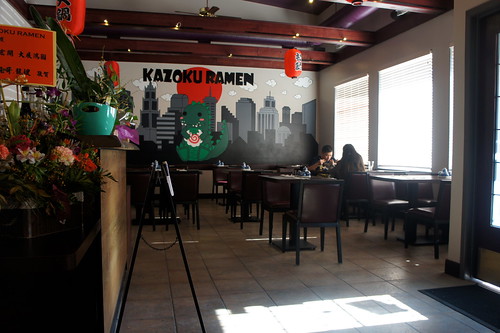 The inside is pretty spacious with the counter right in the middle splitting the dining area into two main groups. A huge Godzilla mural covers one of Kazoku’s walls. Two thumbs up for the cool art décor. 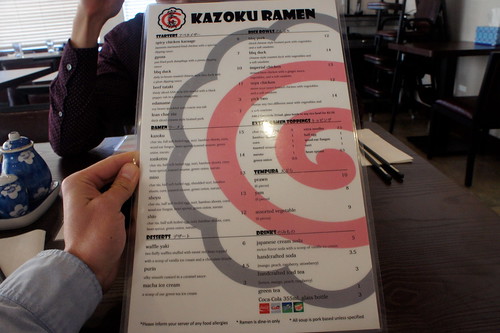 Five types of ramen to choose from on their menu. 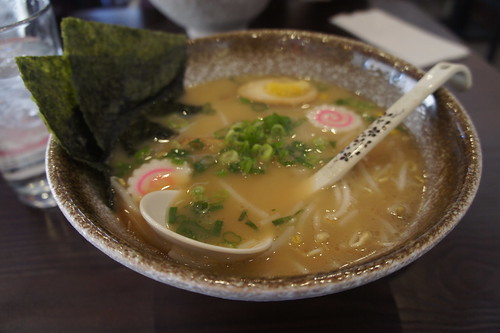 Char siu, half soft-boiled egg, nori, bamboo shoots, corn, bean sprouts, toasted sesame, green onion and naruto. The egg was lacking a bit in the soft oozy yolk compartment and only giving half an egg seems pretty cheap when you’re paying $14.00. The broth had a nice creamy flavour and I thought the noodles had a decent spring/elasticity to them. Definitely the better of the two ramens that we tried today. The bamboo shoots were interesting – much better crunch and flavour than the crappy cheap ones that you normally get. 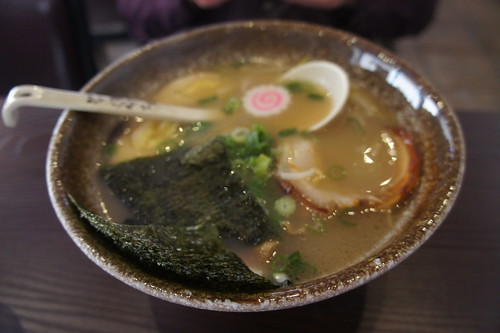 The Kazoku comes with pretty much the same toppings as the tonkatsu except you get a full soft-boiled egg and wood-ear fungus. I had a taste of Bbop’s broth and you could tell right away that the broth was made from chicken. I believe that it’s a mix of chicken and pork. Interesting. We both thought it lacked a bit of flavour (Bbop had to ad some salt to his bowl) but he mentioned that the broth grew on him after mixing all the ingredients together. Flavours are definitely on the subtle side. We were both pretty stuffed after eating our bowls.

It’s nice to see a bunch of new restaurants opening in the west end! Especially Asian ones in the area (hello Cô Dô Hue and Island Cafe & Bistro). Is it better than Yuzen? Tough to say based on a first visit but one thing is certain – eating ramen is sure going to be a lot easier! With long hours of 11am-10pm (closed Tuesday) and 11-12am (midnight) on Friday/Saturday, you can grab a bowl for some late night eats. Yaaaaaaaaaas.