A Taverna is one of those off the radar restaurants that really shouldn’t be. Tucked away and hidden in the Delton neighbourhood, I doubt many even know of it’s existence. Well, you should. This place screams hidden gem as it’s in the middle of nowhere (across the street from a school) and a few blocks north of 118 Avenue.

Visiting this Portuguese restaurant has been on my list for awhile. I’ve never been to Portugal (yet) but I’ve been to Brazil recently so I guess you could say I have some experience with Portuguese food. Heck, Montreal has one of the BEST Portuguese rotisserie chicken places I’ve ever been to – Romados. Let’s just say I frequented it many times back in my university days. Do yourself a favour and check them out if you’re in the land of poutine and smoked meat. 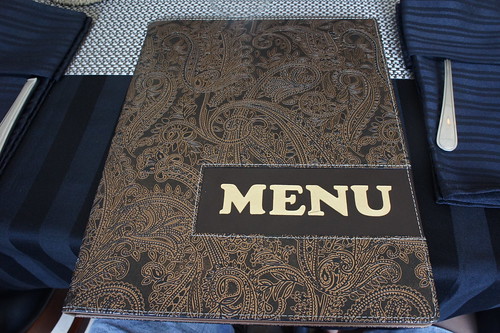 Two friends and I decided to pay a visit to A Taverna on a late Sunday afternoon for lunch. There is a bar at the back where a few regulars were mingling. We were the first group eating in the main dining area but a couple other parties eventually showed up. Hope they’re busier other days! The waiter we had was very friendly but his English was pretty limited.

Quinta do barco loureiro ($28.00/bottle) – a green wine that was light and easy to drink. Went pretty well with all the tapas we ordered.

Portuguese bread basket ($1.50) – we didn’t touch the bread basket that the waiter brought out but they sneakily charge you for it. Don’t like when restaurants do that, especially when they don’t tell you it’ll cost you. Shady. 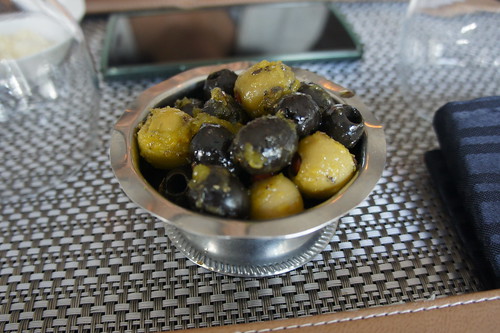 Marinated olives and oregans. They brought these out to the table as well but they were actually tasty. Two different types of olives that had the right amount of salty brine to it. I could eat a whole bowl of these but that would probably be a bad idea. 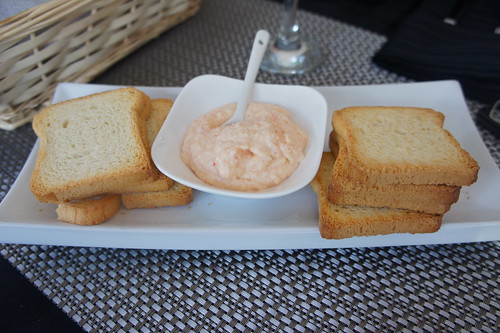 The crab pate was smooth, creamy and came with a couple pieces of lightly toasted crostinis. Definitely a great dish to share. 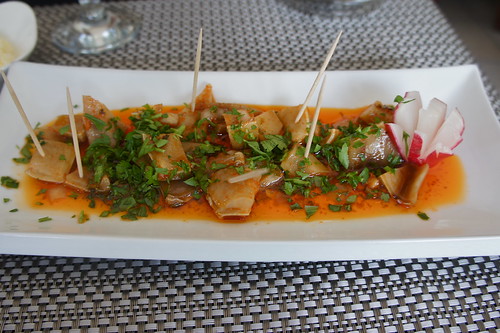 The piglet ear salad was terrific. Crunchy texture that reminded us of Chinese style street food. The sauce underneath was excellent and had a nice zing to it. 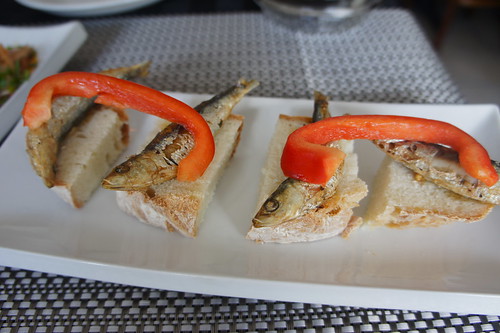 Fried with sea salt and red peppers. The sardines were tasty but the bread was plain and tasteless. If they had toasted or heated up the bread, that would have made it better. Also, not sure why there was one red pepper for two pieces of sardine. 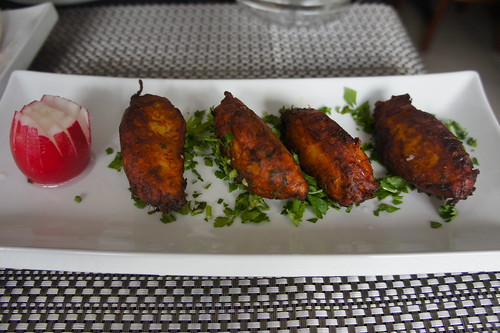 The codfish mini cakes were lightly fried to give it a slightly crunchy outside but we found the inside to be a tad on the mushy side. The flavours were spot on inside though.

Oven baked with flavours and drizzled with olive oil. The octopus came with three massive full sized potatoes. My friend claimed these to be the best potatoes she’s had in her life. Pretty high praise coming from her. They were impressively tender and full of olive oil/spice flavours. As for the octopus, it was grilled to perfection. Again, the portion was very generous and extremely tender. YUM. 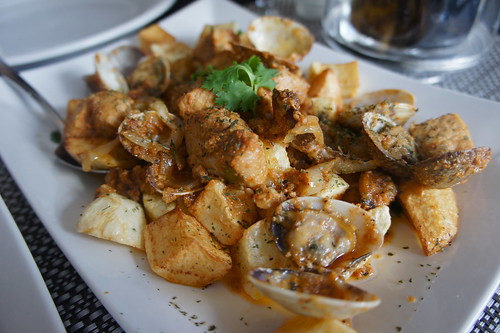 Pork, clams and potatoes braised in garlic, tomato and wine. We may have overdone it ordering two potato heavy entrees but the clams were succulent and tasty. The pork was a tad on the dry side (just slightly) but the dish was addictive.

I will definitely be back to try the rest of their pestico (tapas) dishes. The flaming chorizo looked awesome. It was ablaze (hello spectacle!) when they brought it out to a customer’s table. Everything we had was delicious, I just hope that more people go out to support them. Try out their dinner deal ($25.00 table d’hôte style). Food is great and prices are extremely reasonable.

Been too long since I’ve had some hand pulled noodles. First time at Happy Noodle House.
Follow CHERRY BOB-OMBS on WordPress.com
Loading Comments...