Where to eat late on a Friday? I keep trying to make it out to White Elephant Thai Cuisine but it hasn’t aligned with the heavens yet. Curse their ridiculous hours! One of these days, I’ll make it. We decided to head to Chinatown and try Soban Korean. B.B.Q. Luck again wasn’t on our side as Soban decided to close early that night. Hate when restaurants do that! It’s not like we got there last second either. We were there an hour before their closing time. Alright, enough complaints. We were starved by then so we walked around for a bit before spotting Thai Bistro. Open till 12am. Boom, done. 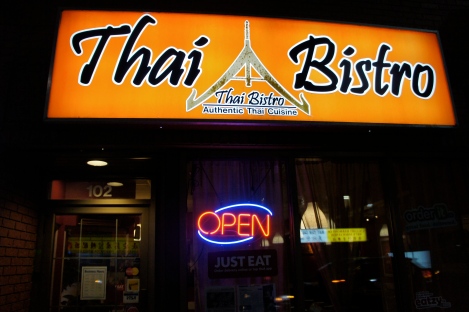 The interior isn’t fancy but has a very quaint, relaxing ambiance to it. There was a massive table of 20 people wrapping up their dinner when we arrived. I bet they were taking advantage of the BYOW (corkage fee is $12.00 for a bottle).

We perused the menu quickly and decided on three entrees. Interestingly enough, the waitress thought three dishes would be too much food for two people, which was nice of her to say to us. But clearly she doesn’t know Asians can eat. We devoured everything except for a tiny box of leftovers.

My friend ordered the Thai style iced tea, which was actually quite good. I’ll have to start ordering these from now on. Refreshingly light. 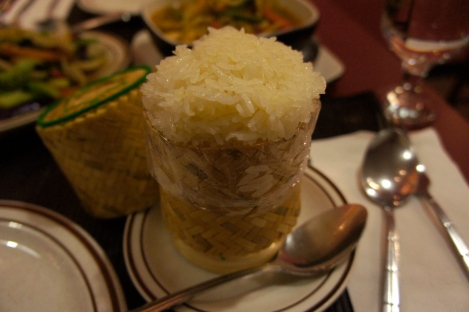 Beautifully presented, the sticky rice comes in a light weaved basket. The sticky rice was fluffy, fragrant and perfect to go with dishes. YUM.

Stir fried rice noodle with beef, vegetables and curry powder gravy. This was my favourite dish of the night. The noodles had an excellent bite to them.

Water base curry with pork, herbs, spices and vegetables. Also known as “jungle” curry, we decided to try this dish out as it was new to both of our palates. This was our least favourite of the night as it lacked any real depth, spiciness and flavour that you normally associate with Thai curries. The sour curry sounded much more promising. As well, the pork added to the dish wasn’t very good either. We ended up leaving the curry as it was more like a watered down soup base than anything curry related.

Stir fry eggplant with soya bean paste and basil. We were originally going to get #64 (stir fry garlic, pepper and vegetables) but the waitress suggested we try the eggplant instead. I love eggplant so I was in very much in agreement. The eggplant was perfectly cooked, there was just NOT enough! Seriously, if the main ingredient is eggplant, I want there to be an eggplant overload of it on the plate. The rest of your vegetables were pretty standard.

Thai Bistro is probably not the best Thai place in town but if you need a place to satisfy your midnight cravings, this is your spot. They are open till midnight Friday and Saturday! The staff are also very sweet and humble. If you crave something order than Chinese in Chinatown, check them out.