Our second day out and about in Seattle. Obviously, we had to head over to Pike Place Market to experience the weekend madness. Crazy how busy it is every time I’ve gone but at least it’s organized chaos. This place is amazing to just walk around and experience the hustle and bustle of not only the crowds but the ridiculous amount of food stalls crammed into such a tiny spot.

Piroshky Piroshky has some delicious, piping hot Polish pastries. There’s constantly a lineup but luckily, it moves at a steady pace. Just be ready to order once it’s your turn at the counter.

Hot, flaky, crunchy goodness. It reminded me a bit like a chicken pot pie.

You could taste the smoked salmon pate. Again, it was fresh, hot and the pate was smooth.

Piroshky Piroshky knows what’s up when it comes to churning out fresh pastries daily. Check them out for a quick snack and don’t let the line deter you.

Good ‘ol Jack’s Fish Spot. I wanted something light to eat and after walking a loop around Pike’s Place and sampling a few things, I went back to grab a small meal. The guys working the counter are super chill and really easy going.

Their lineup is pretty constant (or is that just everywhere here) but they move you along pretty quickly. Order at the counter and then wait it out on the side, where there’s a few cramped stools to sit on if you can snag a seat or two. Snapped a quick photo of their side bulletin menu. Look at all that fresh seafood! So cheap too. 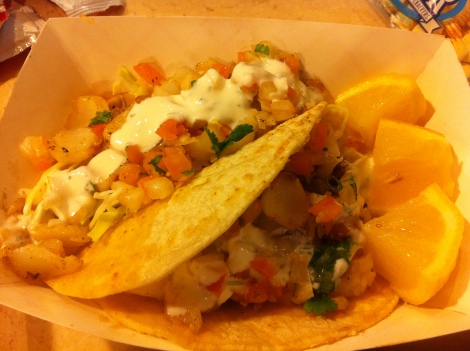 I was having some trouble deciding what to order but decided to go with two fresh fish tacos. Decent sized portion along with tomatoes, onion, cilantro and a creamy tartar sauce. The taco could have used a bit more char to it and while the fish was fresh, it was lacking a bit of oomph. The taco needed something like a Mexican sauce to give it a punch.

Oh man, I’m a sucker for anything garlic. These fries were garlicky goodness. Freshly cut, well seasoned with a bit of fresh herbs in it.

Pretty decent meal for less than $10.00. Can’t really complain about that.

I was looking for a drink to quench my thirst and stumbled upon Shy Giant Frozen Yogurt. They had some really delicious looking frozen yogurt but my eyes were diverted to their yogurt smoothies. 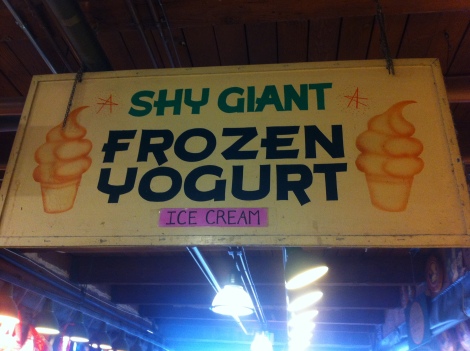 Look at all the items Shy Giant has – everything from yogurt, ice cream to float, smoothies and gourmet shakes.

The name says it all – you get every type of berry you can think of mixed in with yogurt and your choice of milk/juice. Blueberry, marionberry (blackberry), raspberry, strawberry and bananas. Thick, full of berry deliciousness, this was totally worth the price tag. So refreshing.

Five words. $0.75 Oyster Special Happy Hour. YES please! We came on a Saturday evening and even made a reservation well in advanced. Maybe our reso was too early (5pm) but we didn’t need it (better to be safe than sorry, I guess). Wow, the inside of Flying Fish is faaaaaancy. I wasn’t expecting it to be so classy. 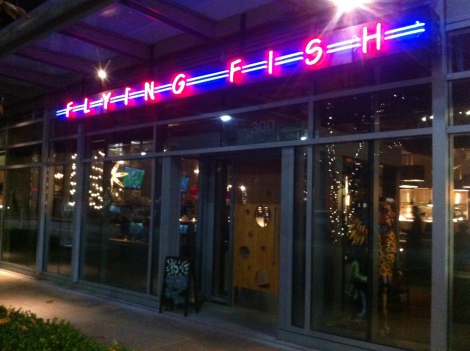 No worries though, we took advantage of the oyster deals, which go from 3-6pm and 8:30pm-closed. Yes, I know the sign says 4pm but their website says 3pm. Someone double check that.

We had such a genuine, sweet waitress during our evening. Seriously, the service was excellent and she was very accommodating. We only came here for the oysters but we perused the dinner menu. Definitely on the $$$ scale but I’m sure the rest of their food is good. 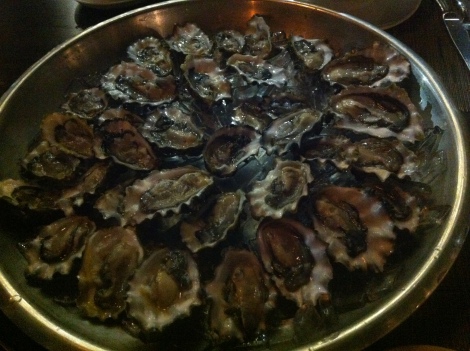 We started off with three dozen oysters. So fresh and cheap. Ugh, why can’t I live somewhere were oysters are so cheap?!! The oysters were divine. Just add a dab of horseradish, cocktail sauce and lemon = you’re good to go. Drooling just thinking about them. We wanted a couple more so my dad and I ended up ordering another dozen to finish off our meal. Had to take full advantage of cheap oysters!

My mom wanted something warm and creamy so she ordered the seafood chowder. Came with mussels, bay shrimp, and scallops along with two pieces of toasted bread. It was delicious and creamy.

Great spot to check out if you want some cheap oysters. You can’t go wrong with $0.75 oysters. Seriously. Close to downtown so worth checking out for some Happy Hour time.

After walking around the area, I wanted to grab a late snack to eat for the ride home. We spotted Serious Pie & Biscuit on the way back to our car, which coincidentally, was one of the places I had read about. Didn’t know they had a location in Westlake (the other two being in Virginia and Pike). Well, lucky us, we dropped in and ordered a pizza to go.

The place was bustling. Those poor waiters/waitresses that have to constantly go up and down the stairs to bring pizza up to customers. Good workout I guess, haha. 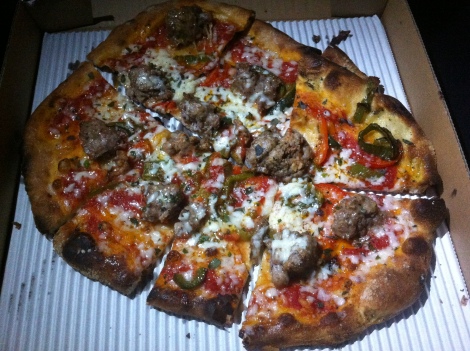 Sweet fennel sausage, roasted peppers and provolone. The sausage had just the right amount of sweetness to it while the crust was light and crunchy. The perfect amount for a midnight snack (but I’m doubtful whether I’d be full from this had I ordered it for dinner).

Definitely check out Serious Pie & Biscuit’s Happy Hour deals (Monday to Friday, 3-5pm) where you can get mini pies for only $6.00! Such good dealzzz, if only that existed back home.