I’ve heard about El Rancho Spanish restaurant for quite some time now but never had the urge to try it out until recently when I saw Steph’s post on it.  Can someone say PUPUSAS? 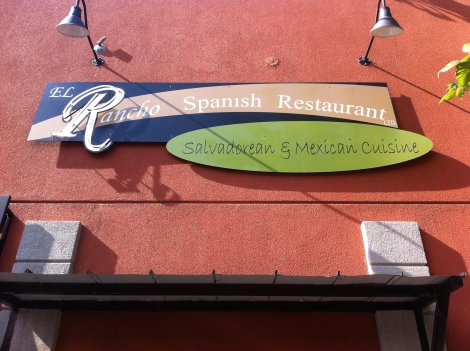 I went with two other co-workers on a Wednesday for lunch and the place was empty (only one other table was occupied and they were wrapping up when we arrived).  Maybe it was because we came during the latter part of lunch (closer to 1pm) but yikes, I hope they are busier during peak times.

We were hungry for some pupusas so we ordered right away:

– 5x Pupusas ($3.00 each) – corn tortillas stuffed with cheese, beans and chicharon (pork), these were the bomb diggity.  So good!  Best I’ve had in Edmonton so far.

Comes with a side of tomato sauce and pickled cabbage.  Put both over the top of your pupusas and you are golden.  Definitely a must order.

– Enchilada mexicana ($12.95) – corn tortilla with chicken over a Mexican mole sauce, sour cream and served with a side of rice and salad.  The salad had a nice sweet tangy sauce to it but the best part of the dish was the Mexican mole sauce.  So good!  Can someone teach me how to make it?

– Tacos ($8.50 for four) – you can choose from chicken, beef, chorizo and tofu.  We ordered two chicken and two chorizo (but our waitress brought us out two beef ones instead).  I tried the chicken one and it was disappointing.  Chicken was dry and lacked any flavour, even with the small side of salsa.  I wouldn’t order their tacos again.

– Spicy Mexican tamales ($5.25 for two) – I wouldn’t say the tamales were spicy but they were tasty.  It came with a side of pickled cabbage which went nicely with the tamales. Wrapped in corn husks, these tamales are corn flavoured and filled with pieces of chicken.

– Horchata ($3.00) – if you’ve never had horchata, you are missing out on Mexican drink goodness.  Light, refreshing, it’s similar to milk but this one had hints of vanilla, rice and cinnamon.  Yum.

It was a tasty and filling lunch at El Rancho.  Prices are reasonable and the one waitress working the tables is very friendly.  I will be back to try their other dishes but make sure you order the pupusas!