I haven’t been to Sloppy Hoggs Roed Hus since it first opened so I was pleasantly surprised when I walked into their new digs. It’s much more spacious with lots of TV’s and long, wooden table booths. One thing that hasn’t changed though is the portions – dishes are still ginormous! Come hungry because the burger is as big as your head. 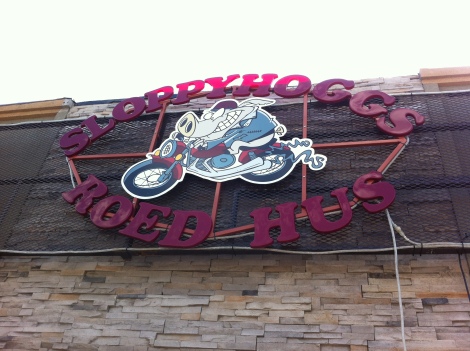 We each ordered our own dish but could have easily shared two dishes and that would have been more than enough for all three of us.

Comes with a spicy raspberry compote, kangaroo, elk, chicken thigh, bacon, brie, lettuce, tomato, pickles, mozzarella, banana peppers and waffle sauce. Yes, that is a MASSIVE amount of meat on one waffle bun. You can barely even get a full bite because it’s stuffed with so many different things. It would probably be easier to eat if it were an open faced sandwich. But then there would be no challenge right? Man vs. meat, who will win? 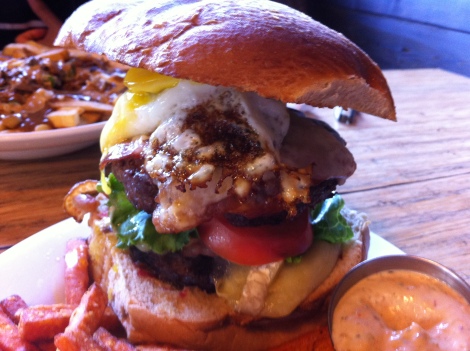 I added sweet potato fries to mine ($3 extra) and picked pitt beans while my friend had the red beans. The pitt beans were much more sweeter and a nice accompaniment. As for the caveman, according to my two friends, it was on “You Gotta Eat Here” so we had to try it out. Easily the best sounding burger on Sloppy Hoggs menu. In hindsight, we should have shared as this dish easily would fill two people. Really tasty and if you want bang for your buck, this is the place. 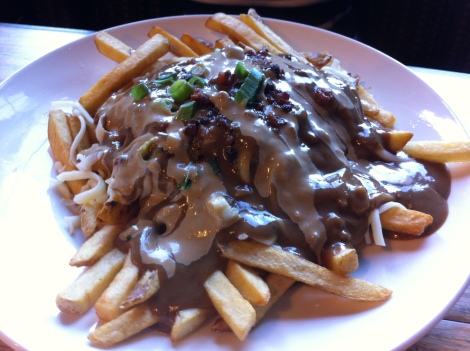 Fries over gravy, pulled pork, smoke house aged cheddar, green onion, bacon crumble and waffle sauce. This plate was absolutely MASSIVE (noticing a trend here?). It’s their version of a poutine. My friend hardly made a dent in her dish. Don’t even know how someone could eat that much poutine by themselves…or better yet, who would want to?

We all had leftover boxes to take home. The burgers were so massive that we only ate about half of them (so much meat). Make sure you come hungry!